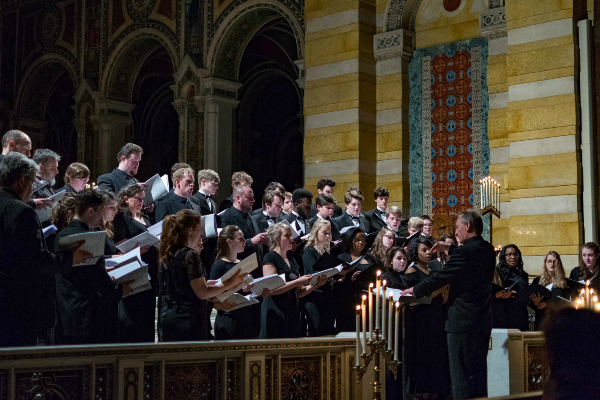 Tenebrae guides listeners on a 'Path of Miracles'

Envision yourself as a religious pilgrim, seeking a stronger union within the Divine or looking for answers to the mysteries of life, uncertain yet insistent upon seeking. Perhaps you are living centuries ago, unsure about the course of religion and where it might lead. Can music illumine your search and provide a context for examining your beliefs?

Strangely enough, new music just might help us recapture the uncertainty, the hope, and the freshness of the past. So much of the liturgical music we hear today, even the so-called "contemporary" and "praise" songs, is based on harmonic, rhythmic and melodic traditions that have evolved over the past centuries. But if a fusion of styles from many periods and traditions could be forged, so that the audience is experiencing something completely new and bracing, it has the potential to shock the senses so as to make us feel that we are setting a course in new territory, just as early spiritual sojourners must have felt.

Such was the case at the Cathedral Basilica when the phenomenal British choral group Tenebrae, an ensemble still less than 20 years old, presented its Grammy-nominated performance of its first commissioned work, "Path of Miracles" by Joby Talbot, premiered in 2005, alongside a new work, "Footsteps" by Owain Park.

Director Nigel Short founded Tenebrae soon after completing his tenure as a member of The King's Singers in 2000. In less than two decades he has brought Tenebrae to the forefront of innovative new choral ensembles. Utilizing an impressive array of dynamics, combined with an almost ethereal blending of tone and timbre, Short also displays great creativity in staging. The concert was performed by candlelight, and audience attention was enhanced by movement of groups of singers throughout the Cathedral Basilica space during the performance, even including a segment when the entire ensemble sang from the central pews of the vast sanctuary. The acoustical balance achieved by Tenebrae was so perfect that the group was able to overcome the notorious reverb of the stunningly beautiful yet cavernous basilica.

Tenebrae was joined in Owain Park's work, which opened the program, by choirs from Rosati-Kain high school, directed by Sarah Hardy, and St. Louis University High, directed by Addie Akin. It is wonderful to see students involved in the production of a major new work affording them the opportunity to work with professionals. Kudos to both directors for the preparatory work to make the young singers able to assist in a challenging new work.

"Footsteps" charts the movement of a traveler through the four seasons, signifying the vicissitudes of spiritual pilgrimage. The texts selected by the composer form a tight synthesis of phrases from such diverse sources as Emily Bronte, John Burroughs, Emily Dickinson and Sanskrit, Japanese and Spanish poetry. Similarly, Park's music paints a wondrous vocal landscape of sounds new and old. At times the voices almost seemed to embody the richness and solidity of a pipe organ, at other times they seemed to soar like birds. Similarly, Park draws upon a vast variety of musical techniques, including chant, counterpoint, traditional melody and atonality.

It could be said of both Owain Park and Joby Talbot, whose longer work followed, that both challenge the ears of the listener, but do so gently by weaving sound from the strands of all the traditions that have evolved in music. The listeners found themselves awash in sound, yet remaining in the midst of a Buddhist-like void of meditation. Such an altered state gives the mind a new set of reflections and a new objectivity and clarity of view.

The title "Path of Miracles" describes a depiction of the Camino Frances route of pilgrimage to the holy site of Santiago de Compostela in Spain. The work divides into four movements named after the principal trailheads of the route. The immense variety of the music and its widely eclectic sources transport the listener to the kaleidoscope of new locations, views and terrains that greet pilgrims on a long trek of self-discovery and physical experience.

The work, sung to a libretto compiled by Robert Dickinson consisting of medieval texts and original poetry, opens with a remarkable rising deep bass chant inspired by aboriginal music of Taiwan. The sound evoked bore a striking resemblance to the chanting of Tibetan monks. What follows is a kaleidoscope of chant, discord, struggle, fervency and serenity. At times the music echoes the harsh atonalism of the 20th century, at other times the sparse sweetness of a medieval chant emerges. It is human nature to look for structure in any musical work, and structure is certainly present in this work, but on first hearing the listener is blown about freely by the winds of ever-changing styles and effects. The result can be bewildering, yet it can also be refreshing and invigorating.

Each singer in a work such as this must deal with the challenge of maintain the strength and integrity of the voice and personal concentration in a lengthy program with very little letup. Correspondingly, the task of binding it all together and maintaining the structural integrity of the whole falls to Director Nigel Short. Fortunately, all were more than equal to the task.

Tenebrae appeared as part of the Cathedral Concerts series, brilliantly assembled and managed by Scott Kennebeck. This was a program for all seasons and for all peoples. Spirituality is the birthright of all human beings. By opening its space to this and other moving presentations, the Cathedral Basilica affirms this universal right and privilege for us all.