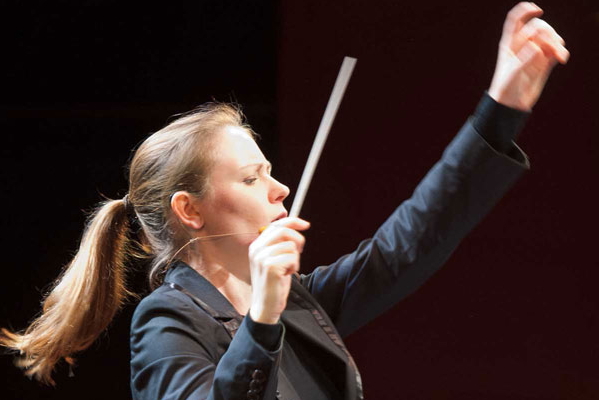 Nature, and the vast array of sounds it creates, arguably inspired the very creation of music in early humankind, yet rarely do we see nature directly combined with human-crafted music in the concert hall. The Saint Louis Symphony Orchestra recently demonstrated that the fusion of the two creates a powerful union that is unexpectedly spiritually, as well as dramatic. Gemma New, the New Zealand-born Resident Conductor of the orchestra, proved an able and gifted interpreter of such profoundly heart-probing music as this at Powell Hall, March 23-25, 2018.

The opening work on the program, the "Capriccio espagnol" by Nicolai Rimsky-Korsakov, drew its impetus not so much from nature as from culture, yet it provided a gutsy and bold introduction to the works that followed, and also afforded New the opportunity to display her talent and strength from the very outset. The Capriccio is one of the great favorites of the orchestral repertoire. Its dashing rhythms and lilting melodies capture the very essence and aroma of Spain. The orchestra performed with gusto and exuberance under New's direction, almost as though the vivid performance was a teaser for the brilliant works that followed.

The first half of the concert rounded out with the "Cantus arcticus" by Finnish composer Einojuhani Rautavaara, completed in 1972. Subtitled "Concerto for Birds and Orchestra," this work is probably the composer's masterpiece. It is difficult to describe the emotional impact of hearing recordings of flocks of arctic birds (with a few birds as "soloists" woven among them) layered atop an orchestra whose instruments almost seem to take flight themselves. A haunting chant without words gradually emerges from the orchestra, standing as a beautiful backdrop to the effervescence of the song birds who seemed to fly all about the hall, thanks--ironically--to the accomplishments of modern technology. This is a profound and moving work worthy of our ongoing attention and respect. Rautavaara is an important composer of the 20th and early 21st centuries whose reputation is beginning to gather even more momentum since his passing in 2016.

SLSO flutist and piccolo player Ann Choomack took center stage with the orchestra to kick off the second half of the program with a work newly commissioned by the SLSO, the London Philharmonic and the Royal Concertgebouw Orchestra, "Solastalgia for Piccolo Flute and Orchestra" by Estonian composer Erkki-Sven Tuur, whose roots lie in rock music. The work is described by the composer as an expression of distress caused by environmental change. The work is angular and mostly atonal, with the piccolo acting as a "catalyst" to "great processes" within the orchestra, perhaps a reference to the larger effects on the environment produced by segments of humanity. The work was very difficult to listen to, due to the shrill and almost screeching effects required of the piccolo (expressions of distress?). Although the piece is certainly well-crafted, it seemed less of a lament for nature than a depiction of dissonance and a shock to the ears. To be fair, perhaps it was the composer's intention to use dissonance and harshness to impel us to reexamine our contemporary lifestyles, but this work seemed somehow out of place in a program designed to honor and replicate nature.

Ann Choomack is certainly a gifted performer who will hopefully receive the opportunity to further display her talents in both traditional and non-traditional ways. The piccolo concertos of Vivaldi would be a great way to hear her shine.

The program concluded with one of the great masterpieces of the 20th century, "Pines of Rome," by Ottorino Respighi, dating from 1924. Who could have imagined that a composer could create such a varied and diverse work simply from contemplating the groves of pine trees that adorn the landscapes of the region of Rome? Yet this is a veritable and complete symphony inspired by trees, and by the children, adults and birds who have moved about them. From the outset, we hear the sounds of children at play beneath the arches of pine trees at the Villa Borghese, moving on to the quiet and contemplative pines "near a Catacomb," onward to the pines of the Janiculum Hill, where the score calls for recordings of birds to be intertwined with the lush strings near the end of the movement. In its day, this was considered a bold move by Respighi, but his choice to do so was a wise one and is viewed today as in important part of the orchestral fabric.

The culmination of the entire work is the witness of the pine trees along the Appian Way to the legions of Roman soldiers who marched along its path. Throughout the entire movement one hears the constant and ever-increasing pounding of the soldiers' feet as they march relentlessly, each adding to the glory and history of the Roman Empire. Even today, the English word "mile" derives from the distance of a thousand steps (milia) trod by a Roman soldier. A thousand steps could not convey the power and majesty of Rome as magnificently as this single movement. No further argument is needed for the power of music to bring the world to life within us.

The use of an antiphonal brass choir situated in the balcony of Powell Hall further added to the excitement of the smashing climax of Respighi's masterpiece, causing the audience to almost jump to their feet with applause at its conclusion. Perhaps the orchestra was ever so slightly fatigued at the end of three concerts in three days, but the passion and spirit remained unfailing. Gemma New directed brilliantly, exhibiting poise and control. Perhaps one of the greatest compliments that could be paid to her is that she had seemed to communicate the thought that she wanted to put the music first, not herself. As such, New has already made an important contribution to the musical life of this city and to the world beyond.