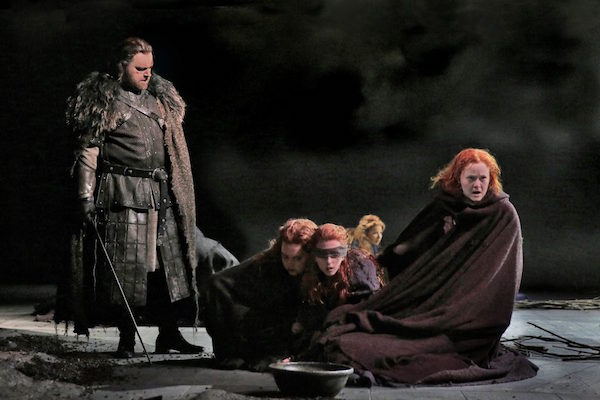 Verdi's 'Macbeth' at the Opera Theatre of St. Louis through June 26

Verdi's opera is every bit as dark and bloody as Shakespeare's drama on which it was based. It is true to the original play in most details of plot and character, yet it differs in significant ways -- ways that express the different political worlds from which the two works sprang. Verdi first addressed Shakespeare's "Scottish play" with an opera that premiered in 1847. After eighteen years he revised it -- the new version opening in 1865. In that eighteen years Italy had became a nation.

For hundreds of years Italy had been merely an assortment of city-states, duchies, dogeries, Papal States and areas ruled by foreign "great powers" -- from Norman and Spanish kings in the south to, more recently, the Habsburg Austrian Empire and Napoleonic France. There was barely even a common language. The great Austrian diplomat Metternich called Italy "nothing more than a geographic expression." But starting around 1815 (when Verdi was two years old) Italy experienced the Risorgimento -- it's great struggle for independence and unification. This ended in a single independent state under King Victor Emmanuel. Verdi was in the middle of this fight. He was already famous when his first Macbeth appeared (one year before Italy's first war of independence). The revised Macbeth opened one year before the third war of independence. During those eighteen years, Verdi's operas became synonymous with the cause of an Italian nation. His very name became a kind of popular acronymic battle cry: "Viva VERDI" or "Viva Vittorio Emanuele, Re D'Italia!"

So it is not surprising that in Verdi's Macbeth we find much more presence of the Scottish people than in Shakespeare. In Shakespeare Macbeth's usurpation of the crown is an outrage against the nobles; in Verdi it is an outrage against the people. Hence we find that Verdi's opera emphasizes the chorus; yes, there are gorgeous arias, but it is the choral work that most distinguishes this opera.

And in this OTSL production the chorus does glorious work! Now one striking invention of Verdi (and Piave, his librettist) is the efflorescence of the witches from three to eighteen! Thus we get another chorus. Verdi does, at one point, give this female chorus a curiously bright and bouncy number that evokes all of those choruses of maidens in Gilbert and Sullivan -- but I suppose he could stomach only just so much gloom and doom. And there seem to be sixteen or so murderers ready to kill the Macduffs. Be that as it may, chorus master Robert Ainsley draws superb work from his choristers, both witches and Scots: perfect synchrony, wonderfully distinct and controlled dynamics and beautiful diction, and true choral glory at the end.

The principals are all splendid, most especially those playing the colossally cursed couple who crave the crown. The folks at OTSL have planned for forty years to do this opera but as general director Timothy O’Leary put it, Stephen Lord -- music director and the conductor of the production -- had always wanted to wait for "the right baritone" to play Macbeth. Well, in Roland Wood he has most assuredly found him. His voice is powerful and pure -- a very dramatic dramatic baritone indeed. His voice simply commands the hall. He is well matched by Julie Makerov as Lady Macbeth. Such power and drama in her voice! Those stunning high notes soar toward the heavens as if to shake loose the tragedy waiting for her there. In those grand choral numbers we hear Miss Makerov's voice shining like a bright lodestar above the chorus. She tells her troubled lord, "I will provide all the strength you need!" Indeed!

Bass Robert Pomakov does impressive work as Banquo. His aria of dark premonition is most moving, and he makes a fearsome and stony ghost -- his shaved head the perfect canvas for all that blood. Tenor Matthew Plenk sings a very strong Macduff. His anguished grief over the deaths of his family will break your heart. And Evan LeRoy Johnson is bright and heroic as Malcolm, the ultimate and rightful king.

The design team serves this opera exquisitely. Set designer Alex Eales gives us a simple vast rear wall with coffered panels, perhaps reminiscent of the dome of the Pantheon. This wall opens or closes with the smooth ease of a camera iris to enlarge or shrink the acting space. Costumer Mark Bouman clothes his characters properly and beautifully in ancient Scottish attire.

Lighting designer Christopher Akerlind creates a dark world for this dark, dark tale. A great troubled gray sky broods over it all and subtle auras of illumination keep the principals visible. The black-robed witches of this coven drift like wraiths through the gloom.

Stage director Lee Blakely does wonderful work -- from the overall visual concept to the very detailed elements of movement and business that carefully support the music, such as the gradual arrival of the witches, their almost magical dispersal, the solitary abandoned figure against a glow. There is much use of long rough branches: When the witches carry them they subtly evoke broom-sticks; when Malcolm's army wields them they become Birnam Wood. And the parade of Banquo's eight descendant kings in Act 3 is strange and disturbing: the witches draw from their caldron, one after another, small gray bundles -- like mummified infants -- and present them for Macbeth. At appropriate moments throughout, there is alarming thunder and lighting. (The world is in turmoil!) It is some of the most beautifully dramatic staging I've seen in a long time.

My congratulations to all involved. Verdi's Macbeth at Opera Theatre of St. Louis is a production not to be missed. It continues through June 26 at the Loretto-Hilton Center on the Webster University campus.

For information on other operas in the season, see the preview article "Tales of love, death, and laughter in Opera Theatre's 2016 season" by Chuck Lavazzi.