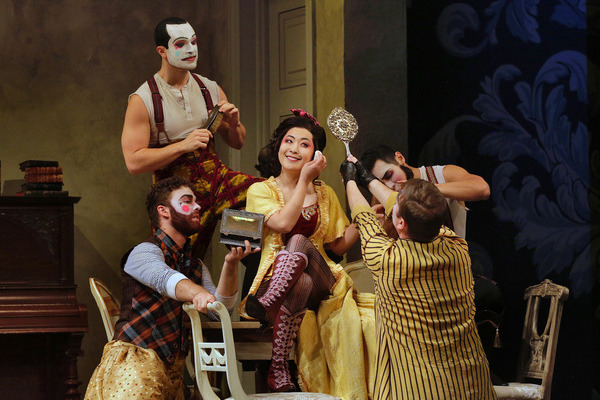 'Ariadne on Naxos' balances wondrously between classic beauty and parody

In 1912 Richard Strauss presented to the world a most curious new opera, Ariadne auf Naxos, in which he combined the staid and grandiose beauty of the classical tragic opera with the comic antics of a commedia troupe. Opera Theatre of St. Louis has opened a simply perfect production of this work. It's entire sensibility -- staging, costumes, sets, lights, and especially the acting style -- expresses a profound empathy with Strauss's subtle blend of classicism and parody. Stage director Sean Curran and his designers -- James Schuette (sets), Amanda Seymour (costumes) and Christopher Akerlind (lighting)--deserve enormous praise for so sensitively capturing the odd heart of this beautiful opera. (Sung in English, OTSL presents it as Ariadne on Naxos.)

So: Classic and commedia? What's that all about? The grand classic style had its heyday in the eighteenth century, and commedia dell'arte flourished even earlier. Now Strauss is most definitely a modern composer -- he died in 1949, and his works caused great controversy in his time. His Salome (1909) was damned by critics as "neurotic," "over-sensual," "decadent." (The Opera Theatre's production of Salome seven years ago deliciously validated all those adjectives!) But Strauss had himself composed around a classic Greek theme before: Elektra (1909) was the first in his long and productive collaboration with librettist Hugo von Hoffmannsthal, a major Austrian poet and playwright. Strauss, like Wagner, sought to make the play and the music one.

Ariadne on Naxos is an opera-within-an-opera. Director Sean Curran has very successfully moved the story from the 18th century to the late 19th. An enormously rich nobleman has hired two companies to provide entertainment at a grand banquet: an opera company will perform Ariadne on Naxos, a new work by a very young composer who is desperate for his first chance at glory, then will come the comedic relief of the second company. But the dinner has been delayed and the fireworks must be set off at the prescribed time. So the performers are given a command: both companies must perform simultaneously. The diva and the composer are outraged but the leader of the comedy troup says, "Hey, improv is our schtick! No problem!"

First we see the preparations. We meet the ego-blown classic Wagnerian soprano and tenor; the merry and irreverent comedy troupe: Zerbinetta, Harlequin, Truffaldino, Brighella, Scaramuccio and their cocky dancing master. We meet the adorable young composer. The composer is a "trousers role" -- a male role sung by a woman. In this role Cecelia Hall just trampled on my heart. She is so young, so earnest, so innocent, so ardent! She is so dedicated to her art. Slender, long-limbed, graceful in a convincingly boyish way -- and with a superb clear sweet voice -- she is perfect!

As the inner opera begins we see Ariadne abandoned by her lover, Theseus, on the isle of Naxos. In glorious (but eventually rather tedious) repetition she bemoans her misery. The comedy troupe arrives and sets out to raise her spirits -- they sing, they plead, they comfort, they dance (in a sort of clownish conga line) -- but to no avail. Eventually the young god Bacchus arrives and he and Ariadne bond romantically.

Marjorie Owens, as Ariadne, is beautiful in her classic Greek gown. Her glorious voice is a marvel of power and control. Tenor A.J. Glueckert does masterly work in the role of Bacchus. Matthew DiBatista sings a delightfully self-confident Dancing Master. John Brancy is a wonderfully athletic Harlequin -- with a glorious voice and a gifted dancer's physicality. Elizabeth Sutphen, Stephanie Sanchez and Liv Redpath do beautiful work as three nymphs who attend Ariadne. Erik von Heyningen, Benjamin Lee, and Miles Mikkanen play comedians who can sing and dance and clown delightfully Levi Hernandez is an excellent Music Master. Our own Ken Page makes a most imposing Major Domo. This is a non-singing role, but Page's remarkable diction and sheer presence make it a memorable role.

But the queen of this production -- the singer who will make you swallow your gum -- is So Young Park as Zerbinetta, the flirtatious dancer/singer with whom all the comedians are in love. Miss Park sings a simply astonishing coloratura aria about her romantic history. Such vocally gymnastic wonders! She sings one high note that I think she must have invented, for surely nothing so high has ever been sung before.

The entire comedy troupe are quite gifted dancers, tumblers and clowns -- as well as first rate operatic singers! And, as if to show that the genius which abounds in this production can happily expend itself on even the smallest details, there is among the comedians a man who strides across the stage vigorously (and only a little mechanically) on THREE LEGS!

The design of this production serves it so well! James Schuette's sets are spacious and lovely; Act I presents an elegant marble-walled hall in the nobleman's palace against a vast damask background. Act II is a bleak island with grand marble doorways against a vast dramatic sky. There are nostalgic theatrical touches that place it in the 19th century: old-fashioned scallop-shell footlights and a low black ground-row along the base of the sky.

Amanda Seymour's gorgeous costumes include Victorian dress for the gentlefolk; grand livery for the household staff; classic "Opera" Greek gowns, robes and armor on Naxos; and, for the comedy troupe, a marvelous blend of commedia, antique circus, and old music-hall. And everything is so perfectly fitted!

Christopher Akerlind's lighting gives wonderful support. There is complex and impeccable use of follow-spots, and at the final moment of the opera-within-an-opera the sky opens into a melodramatically colored glory of apotheosis.

It is in the scene on Naxos especially that Strauss gives us his strange and delicious blend of sincerity and parody. The music is gorgeous, the tale a classic one -- and yet things are just a little bit overdone. At times the music is a bit overblown. The very lyrics are often almost parodic; ordinary phrases are repeated and repeated just a little too often. The very stylized gestures and movements of the nymphs have hints of Isadora Duncan and Francois Del Sarte (whose method, you will recall, was the inspiration for Eulalie Mackechnie Shinn's Ladies Auxiliary Society for the Classic Dance).

My grand congratulations to OTSL and the entire gifted company. It's a superb production: Ariadne on Naxos, at Opera Theatre of St. Louis through June 24.