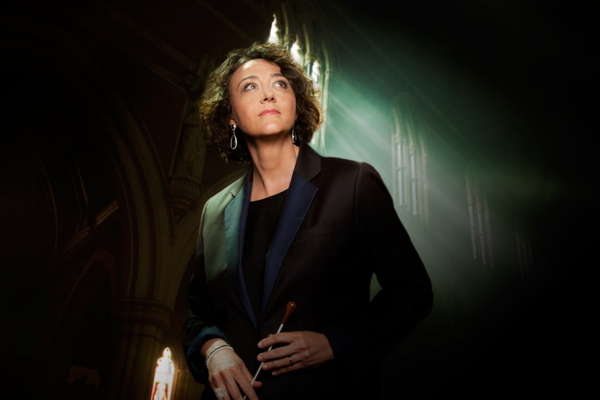 If you didn't know the music, you might think last weekend's St. Louis Symphony Orchestra program (March 9 and 10, 2019), consisting of Stravinsky's "Funeral Song" and the Brahms "German Requiem," might be a dreary business. You would, however be (ahem) dead wrong.

That's because the Brahms work is by no means a typical requiem, filled with fiery depictions of doomsday and noisy lamentation for the deceased. Indeed, as Amy Kaiser observed when the SLSO last performed the "German Requiem" back in 2014, this particular requiem is "all about comfort for the living. People consider it a healing piece. There's no Dies irae. There is the sound of the last trumpet, but it's joyful, not fearful. A victory over death."

You could hear that warm, loving core of Brahms's music in every bar of conductor Nathalie Stutzmann's interpretation of the work when we heard it Saturday night. Yes, there was ominous power in the steady orchestral tread at the beginning of the second movement that leads up to the first big chorus entrance on "Denn alles Fleisch es ist wie Gras" ("For all flesh is as grass"), with its warning of the impermanence of earthly life. And she didn't neglect the high drama of the sixth movement, with that evocation of "der Zeit der letzten Posaune" ("the time of the last trumpet") Ms. Kaiser mentioned. But, yes, most of this music is about solace, and that was beautifully conveyed.

I heard that prominently in the fifth movement, for example, in the warmth and sympathy of soprano soloist Siobhan Stagg's voice as she sang of comforting the mourner "wie Einen seine Mutter tröstet" ("as one whom his mother comforteth")--a line which must have had profound meaning to Brahms, who was moved to complete the "Requiem," at least in part, by the death of his mother. It was also evident in the way Ms. Stutzmann brought out what program annotator Tim Munro calls the "dance-like quality" of the fourth movement, with its imagery of the tabernacles of the Lord. It's music about coming home, and it felt warm and welcoming.

The baritone soloist gets the more stern overtly dramatic music, with a heartfelt lamentation in the third movement and the description of the dead "raised incorruptible" in the sixth. Singing from memory, Stephen Powell delivered those moments with great authority. Both he and Ms. Stagg were placed among the orchestra--she stage right in front of the harps, he stage left in front of the brasses. That seemed to work quite well in terms of separating them sonically from the chorus.

Speaking of the chorus, Saturday night was my first chance to hear them working with their new, slightly taller risers, and I have to say it did make an audible difference. The individual lines in the many contrapuntal passages were very clear and the articulation of the singers (which has always been very good) was excellent.

A chorus master himself, Brahms had a deep understanding of how to write for the human voice. Add in the fact that Ms. Stutzmann is a professional contralto herself, and you have an ideal combination at work. She clearly connected with the emotional core of this music and communicated it to the audience. This was gourmet musical comfort food, with superlative singing and fine playing by the orchestra. I got the sense, as well, that the orchestra and chorus truly loved working with Ms. Stutzmann, which is always a plus.

Although composed in 1909, the Stravinsky "Funeral Song" that opened the concert was believed to be lost in the 1917 Russian revolutions, and only came to light again in 2015. This was its first performance by the SLSO and probably the first chance for the majority of the audience to hear it.

This short (around 12 minutes), dramatic piece feels only a little bit like the work of the man who would astonish the world with his ballet "The Firebird" only a year later. You can hear a "pre echo" of that ballet's opening in the growling first measures from the low strings and brasses and the music overall is colorful and appealing, but otherwise it could be the work of almost any early 20th-century Russian. It got a virtuoso performance from the orchestra in any case, and made for a perfect prelude to the evening.

The night we saw the concert, there was a group of high school students in the audience who apparently hadn't been given any briefing on concert etiquette. They applauded after each movement, despite repeated "shushing" gestures from Ms. Stutzmann and even a Death Glare after the fifth movement. There's no doubt that the intricacies of concert hall manners can be confusing and that they have changed significantly during the last century, but even so an adult somewhere should have taken the opportunity to explain things in advance. As it was, there were some uncomfortable moments for the rest of the audience and, I expect, for them as well.

Next at Powell Hall: Anthony Marwood conducts the St. Louis Symphony Orchestra and plays the violin solo in Beethoven's Violin Concerto and "Romance No. 2 for Violin and Orchestra" Friday and Saturday at 8 pm and Sunday at 3 pm, March 15-17. The program also includes Haydn's Symphony No. 44. The concerts take place at Powell Symphony Hall, 718 North Grand in Grand Center.