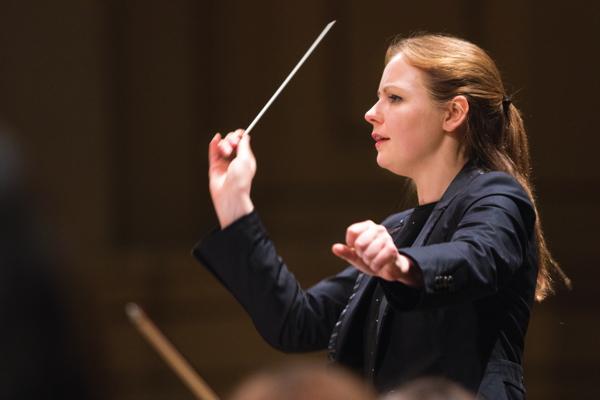 Review: The St. Louis Symphony explores the power of the new, guided by the old

In a program this past Friday (April 5, 2019) comprising works by Mozart, Richard Strauss and contemporary British composer Thomas Adès, the Saint Louis Symphony, with Gemma New at the helm, demonstrated the power of music to connect with the past and point to the future. Yet the lives of Mozart and, particularly, Strauss also show that a composer must also deal with the present as well.

[Find out more about the music with the symphony preview.]

As a consummate composer of the Classical period, Mozart embodied the elegance and stateliness of his era. Sometimes, though, there is a certain impersonal quality to the formulaic music of his day, which explains his heavy reliance on melodies derived from major chords and scale runs. Still, his own originality often found a way to express itself. One of Mozart's best-loved works is the Concerto in C Major for Flute and Harp, performed by principal SLSO flutist Mark Sparks and principal harpist Allegra Lilly as soloists.

It comes as a surprise to many to learn that Mozart was not fond of the flute of his day, even though he wrote beautifully for the instrument. This was likely due to the fact that flutes of Mozart's era were usually difficult to play in tune and often projected poorly. It is almost as though Mozart's flute music was waiting for the modern era to be performed on today's concert flute with its soaring tone. Mark Sparks executed the flowing passages with a facility and projection that surely would have pleased Mozart. Allegra Lilly likewise breathed life into an instrument that is both remarkably beautiful as well as challenging to play. Mozart's score perhaps gives a bit more melody to the flute than to the harp, yet to the harp he granted a luxuriant harmony and some dramatic flourishes. Lilly and Sparks make an effective musical partnership, in the truest sense of the word. The acoustics in Powell Hall were not always conducive to the lower registers of the harp, but both instruments were audible, and Gemma New molded a wonderful balance between the solo instruments and the orchestra.

The second half of the program consisted of the orchestral suite from Richard Strauss' incidental music to Moliere's engaging play from the 1600s, "Le Bourgeois Gentilhomme" (The Would-Be Gentleman). Although Strauss' score relies on a limited number of musicians, it still possesses a wide range of intricacies, boisterous rhythms, humor and even a bit of pathos. New performed the challenging task of holding the ensemble together tightly without losing the sense of spontaneity that was so highly valued by Strauss. During her tenure with the SLSO, New has demonstrated herself to be a skilled conductor, always vigilant and on game. One of her great gifts is the ability to maintain an excellent balance among all the instruments and sections of the orchestra. Melodies and phrasing under her baton are rarely lost or understated. In today's large concert halls, this is an extremely valuable talent.

For decades, Richard Strauss has suffered disdain for his alliance with the Nazis prior to and during World War II. In 1933 he was appointed to a major artistic post within the regime, and his music was used at the infamous 1936 Olympic Games in Berlin.

What is not nearly so well known, though, is that Strauss' son Franz was married to a Jewish woman, Alice von Grab-Hermannsworth. This meant that Strauss' grandchildren, whom he clearly adored, were legally Jews. Alice was arrested twice during the war, and Franz was arrested once. It is becoming increasingly clear that Strauss did engage in heroic efforts to keep his daughter-in-law and her entire family safe, even visiting Theresienstadt in a hopeless attempt to beg for the release of Alice's imprisoned family. Strauss attempted to use whatever clout he had with the Nazi party to help where he could. Although Strauss managed to keep Alice, Franz and their children safe, nevertheless 25 members of Alice's extended family were murdered by the Nazis. The grandchildren that Strauss loved so deeply grew up with only one set of grandparents. The music for "Le Bourgeois Gentilhomme," which appeared in 1917, dreams of a different time.

The program opened with "Three Studies from Couperin" (2006) by London-born composer Thomas Adès, who has long championed Couperin's work. The three movements of the work constitute an orchestral transcription of keyboard works by the Baroque composer. Although it was a noble effort, with inventive orchestration--percussionist Will James rendered yeoman's work managing tympani, bass drum, marimba, et al., sometimes simultaneously--the pieces seemed to lose much of the rhythmic punctuation (despite the aforementioned battery of percussion instruments) that occurs naturally on a keyboard instrument such as the harpsichord or piano. Couperin is a great composer worthy of greater attention than we normally pay, so Adès should be applauded for his efforts, but these pieces seem to work best on a solo keyboard instrument.

Perhaps part of the significance of all three composers on this program lies in the fact that all acknowledged their debt to the heritage of the past, realizing that they stand on the proverbial shoulders of giants, yet all understood the need to remain grounded in the present. Just as Moliere, Couperin, and the classicism of ancient times cast towering influences on their works, these three composers, and the lives they led, will surely inform the music and overall culture of the future.