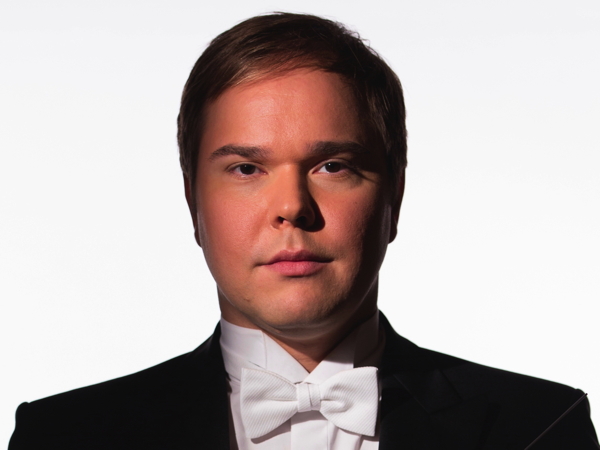 Review: Marcelo Lehninger and the SLSO show their virtuosity with music of Hindemith, Prokofiev, and Mussorgsky/Ravel

For some years now, the St. Louis Symphony Orchestra (SLSO) has been bringing younger guest conductors to town to make their local debuts on the Powell Hall stage. Every one of them has been very impressive, in my experience, leaving me with real hope about the future of classical music.

This weekend was no exception, as Brazilian-born Marcelo Lehninger made his first St. Louis appearance on Friday, November 22nd with an evening of music that showcased the virtuosity of both piano soloist Simon Trpceski and the members of the SLSO. Despite having to conduct from a chair because of a recently broken foot, Mr. Lehninger was a strong physical presence on the podium, leading the band in dynamic and insightful performances of this highly varied program.

He also had one of the most striking conductor entrances I have ever seen, gliding on stage on a small scooter that supported his temporarily disabled pedal extremity.

The concert opened with work that the SLSO presented for the first and (until this weekend) only time back in 1970: the "Concert Music for Strings and Brass," Op. 10, by Paul Hindemith. Composed in response to a commission by the Boston Symphony Orchestra in 1930, "Concert Music" is a product of what is often called the composer's "neoclassical" phase, although the densely contrapuntal texture really harks back to the Baroque era. Combine that texture with the unusual orchestration of a dozen brass instruments (four horns, four trumpets, three trombones, and a tuba) plus strings, and you have the potential for serious balance issues that could make the individual melodic lines hard to hear.

Happily, that wasn't the case Friday night. The strings got overwhelmed a bit at the beginning, but overall Mr. Lehninger made it easy to discern the individual threads of Hindemith's musical tapestry and got some excellent playing from the orchestra in the process. The SLSO strings were especially adept in their handling of the rapid passages that open the second half of the piece, and some minor intonation issues in the horns aside, the brasses were strong all the way through, with fine solos from Associate Principal Trumpet Tom Drake and Principal Trombone Tim Myers.

At around 17 minutes, the "Concert Music" is a short piece--a trait it shared with the next work on the program, Prokofiev's Piano Concerto No. 1, Op. 10, from 1912. Prokofiev played it as his entry for the prestigious Anton Rubinstein Prize for pianists at the St. Petersburg Conservatory in 1914 (which he won), and there's a kind of cocky, "look what I can do" attitude about the piece. Combined with the composer's trademark mordant sense of humor, it makes for an entertaining experience for the listener and a significant technical challenge for the pianist.

And Simon Trpceski was certainly the man for the job. An internationally known artist whose career has taken him to every continent except (as far as I know) Antarctica, Mr. Trpceski played the best Rachmaninoff Third I've ever heard when he was here in 2015. He did an equally fine job with the Prokofiev, delivering every bit of wit and virtuoso flash in the first and third movements with an impeccable sense of style and a mischievous delight while giving full voice to the wistful nostalgia of the second. The result was a performance that was (to quote a Robert Palmer lyric) simply irresistible.

The audience response was warm and enthusiastic, resulting in not one but two Prokofiev encores: the "March" from his "Music for Children" and the "Scherzo Humoristique."

The evening concluded with a work that was no doubt as familiar to the orchestra as it was to the audience: Maurice Ravel's 1922 orchestration of Modest Mussorgsky's 1874 piano suite "Pictures at an Exhibition." Inspired by a visit the previous year to a posthumous exhibition of the works of Russian artist Victor Hartmann, Mussorgsky's original is as colorful and evocative as it is difficult to play. Ravel, who was justifiably regarded as an expert orchestrator, filled his transcription with ingenious touches, like the high woodwinds chirping away in the "Ballet of the Chicks in Their Shells"; the alto sax playing the voice of a troubadour in "The Old Castle"; the hair-raising evocation of "The Hut on Fowl's Legs" (home of the witch Baba-Yaga from Russian folklore); and the triumphant final movement, based on a sketch for "The Great Gate at Kiev".

That means there are multiple opportunities for individual members and sections of the orchestra to show off, and they certainly did so Friday night. Highlights included (but were not limited to) Principal Tuba Derek Fenstermacher's solo in "Bydlo," which pushes the instrument towards the very top of its register; Tom Drake's flawless delivery of the rapid fire trumpet line in "Samuel Goldenbereg and Schmuyle"; the haunting alto sax of Jeffrey Collins in "The Old Castle"; and the entire woodwind section for playing so precisely in the "Ballet of the Chicks in Their Shells" despite Mr. Lehninger's alarmingly fast tempo.

Speaking of Mr. Lehninger, he was once again a strong physical presence, clearly enjoying every moment of this work and putting his own personal stamp of this very familiar material without taking undue liberties. His take on the opening "Promenade" was magisterial. His "Gnomus" snarled and threatened. His decision to have the alto sax fade out slowly at the end of "The Old Castle" added a touch of sadness to the troubadour's voice. And his take on the closing "Great Gate of Kiev" had a degree of subtlety and marked dynamic contrast not always heard in this exultant finale. It was an altogether winning and captivating reading, garnering enthusiastic "bravos" from the crowd.

Next at Powell Hall: Andrew Grams conducts the orchestra and St. Louis Children's Choirs in a complete performance of Tchaikovsky's "Nutcracker" ballet, with special lighting design by Luke Kritzeck, whose portfolio includes work with the San Francisco Symphony, New World Symphony, and Cirque du Soleil. Performances are Friday and Saturday at 8 pm and Sunday at 3 pm, November 29-December 1.