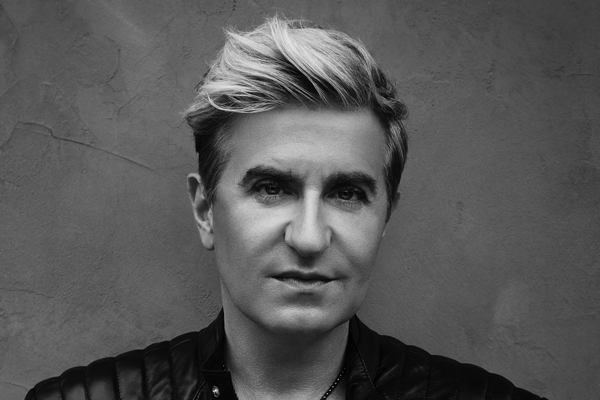 Review: Love was in the air last Sunday at the St. Louis Symphony

In his introductory remarks at the St. Louis Symphony Orchestra (SLSO) concert this Sunday (January 19th), Maestro Stéphane Denève noted that the first work on the program, Wagner's "Siegfried Idyll," was played at Mr. Denève's wedding, where his Best Man just happened to be this weekend's piano soloist, Jean-Yves Thibaudet. "Love is in the air," he declared. As a unifying theme for the concert, it wasn't bad.

Certainly the "Siegfried Idyll" was a labor of love. It was written as a birthday/Christmas present for Wagner's wife Cosima (born on December 24th), and was first performed on the stairs of the Wagner family home in Tribschen on Christmas morning 1870 as a surprise for the sleeping Cosima. The musicians were just over a dozen members of the Tonhalle Orchester Zürich. Wagner hadn't planned on publishing it, but financial considerations obliged him to do so in 1878 in an expanded version for 35 players, which is the one usually performed today.

Love was certainly apparent in Mr. Denève's interpretation, which often lingered affectionately over orchestral details. The sense of emotional warmth was enhanced by solos by Principal Oboe Jelena Dirks, Principal Flute Mark Sparks, and Julian Kaplan on trumpet. Wagner requires the sole trumpet to sit quietly until nearly the end of the piece, at which point he bursts forth with a sunny 12-bar theme that would later make its way into Wagner's opera "Siegfried." So Mr. Kaplan gets points for patience as well as musicianship. There was nice work by Roger Kaza and Chris Dwyer in the horn section as well.

Up next was the Second Piano Concerto by Wagner's father-in-law, Franz Liszt. Unfolding in six separate sections played without pause over around 20 minutes, the work is essentially monothematic in that all the melodic material, varied as it sounds, derives from a theme presented in sweet, simple form by a small choir of woodwinds at the very beginning. Its moods run the gamut from touchingly expressive to dramatically flashy to nobly martial (marziale un poco meno allegro) in the penultimate section.

That means the soloist has to be sensitive to the changes in tone as well as technically proficient (that latter being a sine qua non when it comes to anything by Liszt). Mr. Thibaudet was, not surprisingly, more than up to the task. Whether caressing the keys in the lyrical adagio sostenuto assai opening, setting off the musical fireworks of the allegro agitato assai that followed, or making the piano sing in the bel canto style duet with Principal Cello Daniel Lee in the allegro moderato section, he was unfailingly in synch with the spirit for the score--as was Mr. Denève on the podium.

Mr. Thibaudet responded to the enthusiastic applause with a brief encore: the "Waltz in G-flat" (a.k.a. the "Kupelweiser Waltz"). Composed (but never actually written down) by Franz Schubert for the wedding of his friend Leopold Kupelweiser in 1826, it was played by generations of the family until Richard Strauss was finally asked to write it down in 1943. It's a charming little thing, and was a nice aural "palate cleanser" after the Liszt concerto.

The second half of the program opened with "This Midnight Hour" by contemporary British composer Anna Clyne. First performed in 2015, the work opens with agitated passages in the low strings that suggest a chase scene from a suspense film before morphing into a tipsy dance that requires the strings to use some unorthodox techniques (e.g., some players using no vibrato, others playing slightly out of tune) to imitate the sound of an accordion. The accordion fights it out with the "chase" music before finally lapsing into a sweetly nostalgic melody that almost sounds like something Edith Piaf would have sung. A final bang from the bass drum brings everything to an abrupt finish.

It's an engaging piece that demonstrates that newer music need not sound like a mathematical exercise. In an interview last February, Mr. Denève said that it was "very important that the audience understand that the new music we will perform is music that I believe they can love... that is often very tonal and that has a lot of melodies." "In the Midnight Hour" certainly lived up to that promise, with an impressively virtuosic performance by the band that was received warmly by the audience.

The concert closed with a suite of music from the wonderfully lush and engaging score of Richard Strauss's bittersweet 1911 romantic comedy "Der Rosenkavalier" ("The Knight of the Rose"). The 1945 suite, which was created with Strauss's approval but apparently not with his actual participation, has become familiar to music lovers over the decades. The version of it played Sunday, however, was one created by Mr. Denève in which the order of the selections has been rearranged to more closely track the arc of the libretto. That means that the suite ends with the touching final trio that closes the opera instead of the big, noisy waltz that concludes the original suite.

Having just seen the opera relatively recently, I have to say I found Mr. Denève's approach preferable to the 1945 version in many ways, especially when played and conducted with such authority and such a fine feel for the dramatic line of the original story. There were well-deserved individual curtain calls for Ms. Dirks, Mr. Sparks, and Mr. Kaplan, as well as Mr. Kaza's horns and Principal Clarinet Scott Andrews.

Next at Powell Hall: It's time to go to the movies with "Star Wars: The Empire Strikes Back in Concert," as the SLSO plays the score to accompany a showing of the film on the big screen at Powell Hall Thursday through Sunday, January 23 through 26. Former New York Philharmonic Assistant Conductor Joshua Gersen will be on the podium. Only "limited view" seats are available right now and can be purchased only by calling the box office at 314 534-1700.