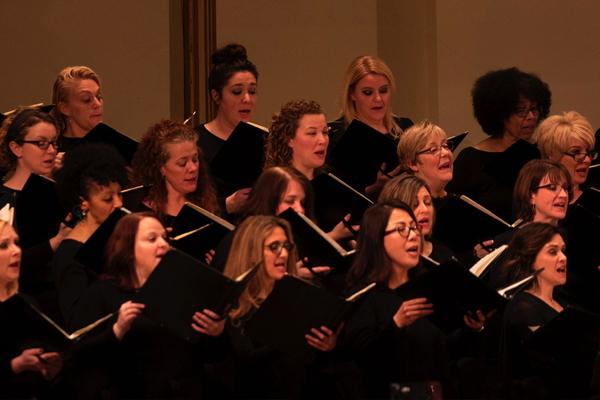 At first glance, the two works that make up this weekend's St. Louis Symphony Orchestra (SLSO) concert might not appear to have a lot in common. Kevin Puts's "Silent Night Elegy," based on music from his 2011 opera "Silent Night," had its premiere in 2018. Beethoven's Symphony No. 9 ("Choral") was first performed in 1824. And yet, despite the nearly two centuries separating the two works, their composers appear to share a similar political outlook.

More on that anon. First, though, I'd like to give you a feel for what you can expect when you see "Silent Night Elegy" performed for the first time this weekend. Unfortunately, I can't.

When there's a new work on the program at the SLSO, I usually manage to track down a recording of it (more often than not on YouTube) and listen to it multiple times, so I can give you some idea of what it sounds like. So far, I have come up with nothing for "Silent Night Elegy," so I will instead refer you to the composer's web site for a detailed description.

The opera that provided the themes for "Silent Night Elegy" is itself based on the 2005 French film "Joyeux Noël," which in turn was inspired by an actual event: the legendary "Christmas truce" of December 1914 , when around 100,000 British and German soldiers agreed to celebrate Christmas together. Carol singing and even football (or, as we Yanks say, soccer) matches were held. The event inspired many fictional adaptations, including the a cappella musical "All is Calm". St. Louis theatregoers will recall that this was, for several years, an annual event at Mustard Seed Theatre.

Although the truce is seen now as something of a unique event it was (as the Wikipedia article on the truce notes) actually one of the more obvious examples of "the widespread spirit of non-co-operation with the war and conduct by serving soldiers" who, unlike the generals far away (or, for that matter, today's remote-control drone operators), saw the cost and futility of war first hand. It's a reminder (as Peter Weiss wrote in "Marat/Sade") that in a war all soldiers ultimately want the same thing: "Not to lie under the earth but to walk upon it without crutches."

Which brings us back to Mr. Puts's words on his composition:

If there is a message borne by the film--or the libretto--it is that once your sworn enemy ceases to be faceless, war becomes far less possible. This is a message I fully believe in.

It is, in short, a message of universal human fellowship. It's an idea Mr. Puts shares with Beethoven, who expressed it most plainly in his Symphony No. 9 by using Friedrich Schiller's poem "An die Freude" ("Ode to Joy") as the text for his choral finale. It's perhaps most obvious in the first verse:

Which, in a singable English translation, becomes:

Joy, thou source of light immortal,
Daughter of Elysium!
Touched with fire, to the portal,
Of thy radiant shrine, we come.
Your sweet magic, frees all others,
Held in custom's rigid rings,
All men on earth become brothers,
In the haven of your wings.

It's hard to justify warfare with those sentiments. Ditto autocratic rule, which is not surprising, given that Beethoven was "a staunch republican and in both his letters and conversation spoke frequently of the importance of liberty."

The late Leonard Bernstein certainly understood that. In December 23, 1989, he led an orchestra of musicians from New York, London, Paris, Leningrad, and both East and West Germany in a performance of the Ninth in Berlin to celebrate the lifting of regulations governing travel between East and West Berlin--a change which marked the beginning of the end of the infamous Berlin Wall. To drive the point home, he changed the word "freude" ("joy") to "freiheit" ("freedom"), making it literally an "Ode to Freedom."

Given the current obsession of some of my fellow citizens with building walls and turning large segments of humanity into faceless enemies, the combination of these particular works of Mr. Puts and Mr. Beethoven on the same program feels especially appropriate right now.

Let me conclude with nine interesting (I hope) facts about Beethoven's Ninth:

What will Stéphane Denève do with it? Come to Powell Hall this weekend and find out!