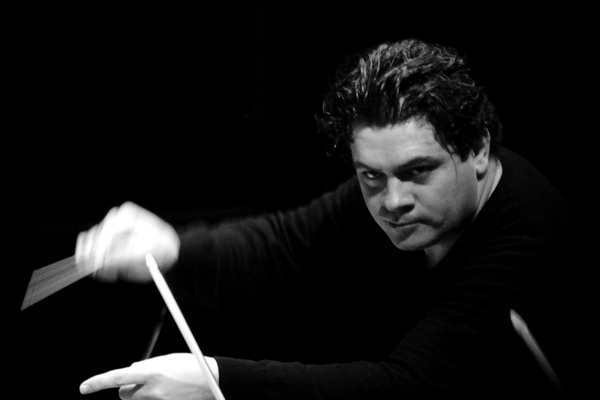 Autumnal drama at the St. Louis Symphony with Măcelaru and Shaham

The St. Louis Symphony gave us an appropriately autumnal concert this weekend, October 21 - 23, 2016, featuring Rachmaninoff's nocturnal Symphonic Dances in a finely nuanced interpretation by guest conductor Christian Măcelaru and Beethoven's Piano Concerto No. 4 with Orli Shaham is that delivered both power and poetry at the keyboard.

Friday night's concert opened with a spectacular performance of Sergey Lyapunov's HD Technicolor orchestration of Balakirev's 1869 Islamey: An Oriental Fantasy. Originally written for solo piano and regarded as one of the most technically difficult works for that instrument, Islamey is essentially a series of restatements of two tunes: a dance the composer heard while traveling in the Caucasian mountains and a lyrical Armenian folk song.

In the piano original, the musical interest is largely generated by the increasingly elaborate ornamentation of these melodies and the sheer thrill of watching a pianist navigate Balakirev's musical thicket--something the composer himself couldn't do, despite being a formidable pianist. In the orchestration, it comes from hearing the melodies tossed among the instruments in a kind of musical tennis match. That requires an exacting attention to detail from both the conductor and the musicians.

We definitely got that Friday night, with virtuoso playing all the way around. Mr. Măcelaru took the lively outer sections of the piece at an almost alarmingly brisk tempo, which contrasted nicely with the intense romanticism of the middle. He found poetic nuances in this showpiece that made it more than just flashy.

The Beethoven Concerto No. 4 in G major, Op. 58 that followed also had its share of poetry. This was especially true in the unusual second movement in which dramatic pronouncements by the orchestra are met with more subdued and expressive material by the soloist. Ms. Shaham's playing was intensely poignant here, which made the quick transition to the jolly, Haydnesque Rondo finale that much more effective.

Decked out in an elegant and shimmering blue gown Ms. Shaham cut a very striking figure at the keyboard. As usual, she was strongly focused on the music, completely "in the moment" as we say in the theatre biz. This was true even when she wasn't playing but just listening to the orchestra or watching Mr. Măcelaru. Reacting to your performing partners is as important in music as it is in theatre, and Ms. Shaham excels at this.

Her keyboard technique was impeccable as it always has been in my experience, as was her sensitivity to the changing moods of the most remarkable of all the Beethoven concerti. She brought out all the lyricism in the score and added some of her own. It was a masterful performance that received a standing ovation. She followed it up with an encore by the composer whose music would take up the last half of the program, Serge Rachmaninoff: a pristine reading of his haunting Prelude in G-sharp minor, Op. 21 No. 12.

"Haunting" is also a word that describes much of Rachmaninoff's Symphonic Dances, Op. 45. Written in 1940 and first performed by Eugene Ormandy and the Philadelphia Orchestra in 1941, this would prove to be the last completed orchestral work by the composer, and there's a sense throughout the piece of a life approaching its conclusion.

I have always been struck by the "late night" feel of this music--and not just because of the chimes in the last movement. Indeed, Rachmaninoff originally titled the three sections "Noon," "Twilight," and "Midnight." The composer later dropped the titles, but they still effectively describe the emotional progression of this music from light to a darkness which is not entirely dispelled by the vigorous final pages of the last dance.

The Symphonic Dances is filled with evidence of Rachmaninoff's genius as an orchestrator. The elaborate and complex string writing, inventive use of brasses and winds, and an effective but never overwhelming use of the large percussion battery all demand a great deal from the musicians, and the members of the SLSO definitely rose to the challenge.

To pick just a few examples: the long pastoral interlude for woodwinds in the first dance, with its poignant alto sax solo by Nathan Nabb, was especially effective. The brass section had real bite in the second movement's spectral waltz. And Roger Kaza's horns were impeccable throughout. There was fine work as well from harpist Allegra Lilly and from all the members of the percussion section.

On the podium, Mr. Măcelaru demonstrated that same combination of drama, subtlety, and control that made his debut with orchestra back in 2014 so impressive. He got a lot of sound out of the band, but it was never overwhelming or distorted, just beautifully balanced.

Next at Powell Hall: Jun Märkl conducts the orchestra with piano soloist Jeremy Denk in Mozart's Piano Concerto No. 23, Liszt's symphonic poem Prometheus, and an orchestral transcription of the Brahms Piano Quartet in G minor. Performances are Friday at 10:30 a.m. and Saturday at 8 p.m., October 28 and 29 at Powell Hall in Grand Center.