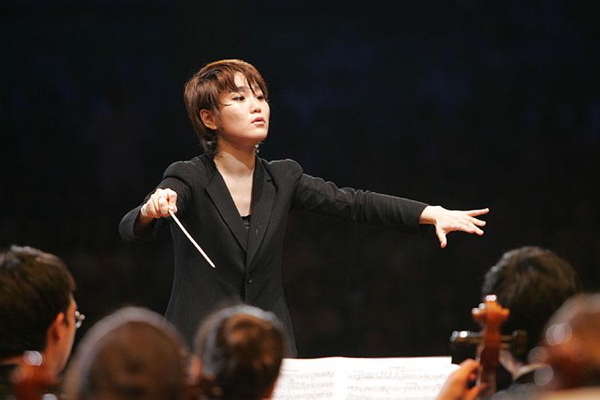 In a laudatory review of Han-Na Chang's Tchaikovsky Symphony No. 5 in E minor, Op. 64, with the Oslo Philharmonic earlier this year, critic Lars O. Fyldal called her "one of this generation's most exciting conductors." Having heard her interpretation of the Fifth with the St. Louis Symphony this past Friday, November 5, I'm inclined to agree.

Like the symphonies that bracket it, the Fifth deals with the composer's obsession with fate and his attempt to find happiness despite his depression and the stress of being gay in Czarist Russia. It's less structurally coherent than the sixth or (especially) the fourth symphonies, but its triumphant final pages have a power that can't be denied. Under Ms. Chang's baton, this familiar music came to vibrant and electrifying life.

Ms. Chang, who made her SLSO debut this weekend, seems to be particularly fond of the Fifth, having often performed it in the past. She conducted without a score and had clearly internalized the music so thoroughly that she was able to bring out nuances that I hadn't heard before, starting with the opening andante statement of the "fate" motif on the clarinets, played with great sensitivity by Scott Andrews and Tina Ward. Ms. Chang had held the opening downbeat for a moment or two in order for the audience to settle in and become almost completely silent, so the melody began in a slow, reverential hush. When the allegro con anima of the movement kicked in, the marked contrast generated real excitement.

In fact, "real excitement" effectively describes the entire performance. Ms. Chang knows how to build Tchaikovsky's big climaxes effectively, making them feel more inevitable and less episodic than they sometimes do. She also allowed some of the more lyrical moments to really "breathe" -- the second subject of the first movement was a good example -- which heightened the sense of drama overall.

Her second movement, with the famous horn solo gracefully rendered by Thomas Jöstlein, was expertly paced. The third movement waltz was beautifully fluid. And the allegro vivace of the final movement dashed along with exhilarating speed. Tchaikovsky concludes the movement by playing "can you top this" with himself multiple times, but Ms. Chang made each big moment feel both necessary and inexorable. The standing ovation that followed the final chords was immediate and entirely justified.

If you missed her Tchaikovsky Fifth this weekend, by the way, you can catch her complete 2014 performance with the Qatar Philharmonic at the 2014 Proms on YouTube.

The other big piece on the program this past weekend was Prokofiev's Violin Concerto No. 1 in D major, Op. 19. The soloist was another newcomer to the Powell Hall stage, the young Czech violinist Jan Mráček. Like Ms. Chang, he also made a very strong impression, with an intelligent and fiercely committed performance of this technically and artistically challenging music.

You could hear that commitment immediately in the gentle, singing tone he brought to the opening of the first movement. Marked sognando (literally "dreaming") it has the soloist playing softly over tremolo strings, and both Mr. Mráček and Ms. Chang gave it a properly haunting feel. The vivacissimo second movement was both fierce and controlled, and the tricky ascending trills at the very end of the piece came off flawlessly. Mr. Mráček threw himself into this music with complete abandon, with very satisfying results.

The concerts opened with brisk and energizing romp through the overture to Mikhail Glinka'a 1842 fairy tale opera Ruslan and Lyudmila. The opera itself hasn't gotten much traction outside of Russia but the overture is one of those pieces that used to crop up often as "filler" on classical LPs -- a function it still serves on classical radio stations today. Its alluring melodies and neat little solo tympani part are irresistible.

Ms. Chang's tempo was snappy and the orchestra's playing was clear and precise all the way through, with Shannon Wood doing the honors on the tympani. Here, as in the rest of the program, Ms. Chang's podium style was fascinating to watch, combining big gestures with precisely executed individual cues and a very neat and eloquent use of the baton.

It's always fascinating to see new performers on the Powell Hall stage and watch how the audience responds to them. If the warm response at Friday night's concert is any indication, we have not seen the last of Ms. Chang here. I certainly look forward to her return.

Next at Powell Hall: Leonard Slatkin conducts the orchestra with piano soloist Olga Kern in Barber's Piano Concerto, Copland's Billy the Kid Suite, Gershwin's Porgy and Bess: Symphonic Picture for Orchestra, and Slatkin's own composition Kinah. Performances are Friday at 10:30 a.m., Saturday at 8 p.m., and Sunday at 3 p.m., November 11-13.