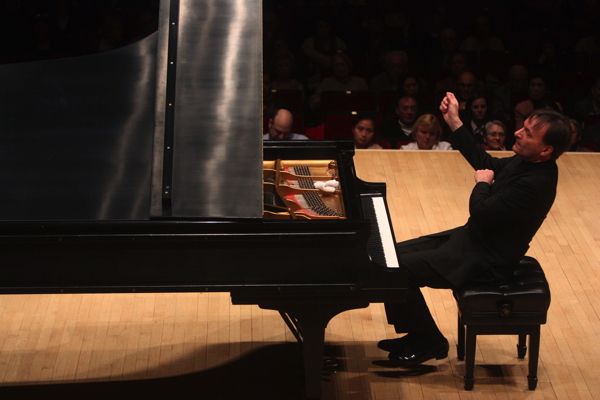 Colorful tone poems and a noble piano concerto create a St. Louis Symphony concert to be thankful for

There was a lot to be thankful for Friday night as Atlanta Symphony Music Director Robert Spano conducted the St. Louis Symphony Orchestra in a program that opened with a pair of late Romantic symphonic poems and closed with one of the greatest of the early-nineteenth century piano concertos.

The first half of the concert was pure "program music," beginning with Pohjola's Daughter from 1906, one of Jean Sibelius's many tone poems inspired by the Kalevala, an epic poem by Elias Lönnrot based on Finnish oral folklore and mythology. This is dark, dramatic music depicting the Finnish equivalent of the Twelve Labors of Hercules, with the mythical hero Väinämöinen trying and ultimately failing to win the heart of the titular daughter of the Northland.

Mr. Spano brought out all the drama and vivid tone painting in the score, starting with the brooding evocation of the stark northern landscape brought to life at the start by the orchestra's deepest voices highlighted by solos from, among others, Danny Lee's cello and Tzuying Huang's bass clarinet. Väinämöinen arrived in a powerful and precise fanfare from the brasses, to which Allegra Lilly's harp and Jennifer Nichtman's flutes replied with a perfectly translucent treatment of the theme for Pohjola's daughter.

The SLSO had, surprisingly, never performed this piece before, but you certainly wouldn't have known that from the quality of the playing. Every section of the ensemble sounded perfect, which made the lack of more enthusiastic applause a bit baffling. Yes, this is a piece that ends as softly as it begins, but I don't think the audience should need (to quote a line from Amadeus) "a good bang at the end...to let them know when to clap."

Up next was Fontane di Roma (Fountains of Rome) the first in Ottorino Respighi's very popular "Roman trilogy" of tone poems composed between 1916 and 1928. In only 15 minutes, the music takes you through a day in Rome as viewed through the lens of four of its famous fountains. We see the sun rise through the mists of the fountain at Valle Giulia, spend the morning frolicking with mythical creatures at the Triton Fountain, marvel at Neptune's majestic chariot at the Trevi Fountain at noon, and finally watch the sun go down behind the Fountain at Villa Medici. "The air is full of the sound of tolling bells, the twittering of birds, the rustling of leaves," wrote Respighi his notes on the score. "Then all dies peacefully into the silence of the night."

Like so many of Respighi's scores, Fountains is a virtual textbook of orchestration, with elements of Debussy, Ravel, and even Richard Strauss all mixed with Respighi's own unique point of view to produce a rich palette of instrumental color. You could hear all of that in exquisite detail throughout this performance, beginning with the shimmering violin harmonics and Jelena Dirks's elegant oboe solo in the opening pages. The play of the Triton fountain's naiads was brought to sparkling life by Allegra Lilly and Megan Stout's harps, the high winds, and the percussion section, while the brasses brought out the majesty of the Trevi fountain.

Mr. Spano brought all this together in a reading that favored somewhat brisk tempos, especially in the Trevi movement, that never felt rushed and that missed none of the many wonderful details of the score. It was thoroughly entrancing and warmly received.

After intermission, Stephen Hough joined the orchestra for a noble and graceful reading of Beethoven's "Emperor" Concerto. Although written under the cloud of war and occupation in Vienna in 1809, this is music that opens in a majestic vein, becomes tender and even wistful in the second movement, and then segues without pause into a cheerful and exuberant rondo.

In his performances of the first three Rachmaninoff concertos with the SLSO back in the spring of 2012, Mr. Hough demonstrated that he had plenty of power when that was called for, but also the ability to display real delicacy. You could hear the power immediately in the oratorical keyboard flourishes that open the first movement and the delicacy in the little diminuendo and touch of rubato that concluded the third solo passage, just before the orchestra entered with the commanding declaration of the first theme.

Throughout the concerto, Mr. Hough and Mr. Spano found lots of shading and subtlety in the music, which made the more dramatic declarations that much more potent. The adagio second movement was pure poetry and the rondo finale danced with rhythmic vitality. The performance as a whole had a real feel of forward momentum, in fact.

As Paul Schiavo points out in his program notes, this is a concerto that integrates the soloist with the orchestra in ways that were novel at the beginning of the nineteenth century, and Mr. Hough and Mr. Spano honored that with a truly collaborative performance.

Although I'm familiar with Mr. Spano's work from recordings, this was my first opportunity to see him in person. He's essentially an upper body conductor, making effective and precise use of his hands and baton, but not much given to the kind of podium choreography that has endeared SLSO Music Director David Robertson to so many of us here. He nevertheless comes across as a warm and engaging character who takes joy in making music. Which is, ultimately, the bottom line.

Next at Powell Hall: Ward Stare conducts the orchestra and violin soloist David Halen in suites from Tchaikovsky's Nutcracker and Sleeping Beauty ballets along with Borodin's Prince Igor Overture. The Nutcracker selections will be accompanied by projected visuals presented in partnership with the Webster University Leigh Gerdine College of Fine Arts. Performances are Friday and Saturday at 8 p.m., and Sunday at 3 p.m., December 2-4, at Powell Hall in Grand Center.