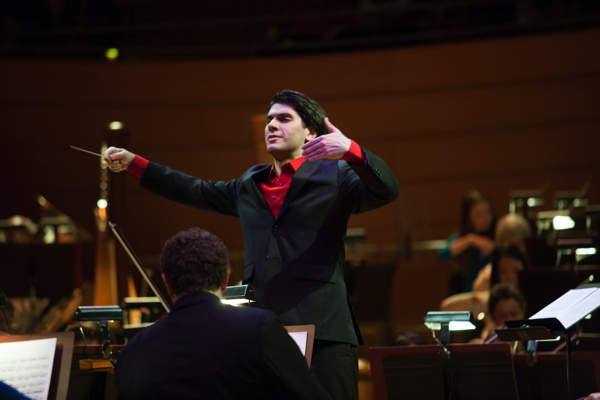 'Disney in Concert: Tale as Old as Time' is an entertainment powerhouse at Powell Hall

For some time now, the last weekend in December has been the time for the St. Louis Symphony to present a family-friendly concert--often with a cinematic theme--designed to pull in big audiences and contribute to the economic bottom line.

This year was no exception with "Disney in Concert: Tale as Old as Time." A production of Symphony Pops Music, the concert package provides clips from animated Disney films, both classic and contemporary, accompanied by live music played by the SLSO and orchestrated by a regular army of arrangers. Also included are a scripted narrative and a quartet of singers to deliver that narrative along with a cornucopia of songs from the movies.

The result, as the Thursday night (December 29) concert clearly demonstrated, was an entertainment powerhouse, in which the lively and precise performance by the SLSO musicians under the baton of guest conductor Aram Demirjian (Associate Conductor of the Kansas City Symphony) was more than matched by the theatrically on-target work of the singers. I often found myself more drawn to their smart and well-choreographed stage show than to the film clips which, after all, were already familiar to many of us in the audience.

As was the case with "The Magical Music of Disney" (the last Symphony Pops production I saw at Powell back in 2012), the featured singers were all experienced and engaging musical theatre professionals who were always completely in the moment and in character.

Whitney Claire Kaufman, who has appeared as the guest soloist in previous SLSO holiday concerts, once again demonstrated an impressive combination of vocal power and theatrical conviction in songs like "When Will My Life Being" (Tangled) and "Reflection" (Mulan). Lisa Livesay was also a sparkling presence in Randy Newman's "Almost There" (The Frog Prince), among others. She and Ms. Kaufman did an excellent job sharing the various princess roles throughout the evening.

Andrew Johnson and Aaron Phillips displayed great versatility as well in a wide variety of male roles, from dashing princes to evil magicians. Mr. Johnson's "Under the Sea" (The Little Mermaid) was lively fun and his "Friends on the Other Side" (The Frog Prince) deliciously evil. He was also a powerful presence in the "The Circle of Life" (The Lion King), an unlisted but obviously scheduled encore that brought the audience to its feet for the second standing ovation of the evening--the first having been generated by the rousing medley of tunes from Frozen that finished the official program.

All too often the phrase "family entertainment" equates to "suitable only for preschoolers." Not so with the symphony's "Disney in Concert: Tale as Old as Time." This was a program that entertained all three generations in our party but, judging from the response, the rest of the standing room only crowd as well. The opening "Disney Memories Overture" was especially moving for me, with its musical and visual clips from classics like Snow White and Seven Dwarfs, Peter Pan, Alice in Wonderland, and Fantasia. For a few moments, I was once again that enraptured child who made his long-suffering Italian uncle sit through three successive showings of Lady and the Tramp.

Now there's some movie magic for you.

The St. Louis Symphony Orchestra is taking a much-deserved break right now, but the regular season returns the weekend of January 13 when David Robertson conducts Dvorak's Symphony No. 9 ("From the New World") and the Korngold Violin Concerto with Gil Shaham as the soloist.