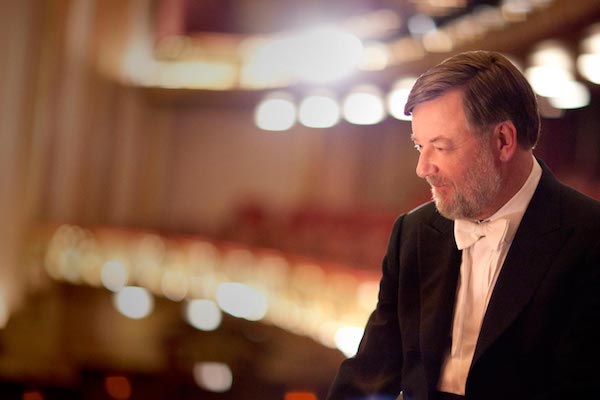 Shakespeare meets the Bible at the St. Louis Symphony

Or perhaps, the Bible meets Shakespeare. If you think about it, both Shakespeare and the Judeo-Christian Bible present a vast panorama of the human condition. The drama and pathos of what it means to be human were vividly portrayed in the three works comprising the program: the Overture to The Merry Wives of Windsor by Otto Nicolai, Edward Elgar's Falstaff: Symphonic Study in C Minor, and the oratorio Belshazzar's Feast by William Walton.

The three works were also united by a British thread that wove them together. Both The Merry Wives of Windsor and Elgar's Falstaff derive from Shakespeare's plays, and Elgar and Walton both hailed from England. Although both the Nicolai and Elgar works portray the life of Sir John Falstaff, each depicted very different aspects of his life. Nicolai's tuneful, soaring overture contrasted beautifully to the rhythmic and dramatic boldness of Elgar, with the pairing illustrating the fact that human life is indeed complex, often filled with comedy, tragedy and the entire host of emotions.

William Walton's grand oratorio, however, fairly well burst with high drama, shock and awe as it recounted the biblical story of a great king brought to his knees by the judgment of God, demonstrating once again the unparalleled ability of music to bring human experience to life as no other medium can. The irrepressible energy of the work, ignited by a battery of percussion and brass and narrated by a dynamically charged chorus and bass soloist, made it easy to forget that the action of the story must be viewed in the listener's own head, not on stage.

Guest conductor Sir Andrew Davis led the orchestra, the Symphony Chorus and bass John Relyea. Davis is an extremely expressive conductor, and also an introspective one, probing deeply with refined gestures almost like a skilled sculptor. One got the feeling that at times the musicians found it difficult to follow his every move, but Davis produced an overall effect of power and intense energy. Despite the common themes of the selections on the program, they represented a varied lot. Davis demonstrated his versatility as a conductor as he worked his way from melodic Romantic moments into 20th century idioms.

Under the guidance of director Amy Kaiser, the Symphony Chorus through the years has tackled increasingly difficult works. Belshazzar's Feast made strong dynamic and rhythmic demands on the singers. Many choruses would have found this work daunting, but the Chorus performed the work handily. Walton's work exudes moments of profound originality and subtle craftsmanship, yet at other times he narrowly escapes falling into the trap of the bold yet forgettable rhythms of the mid-20th century that became banal despite their brashness.  However, the Symphony Chorus maintained a steadiness of tone, diction and sheer strength that never failed to support Walton's musical ideas.

Bass soloist John Relyea possesses an ideal voice for works such as Belshazzar's Feast. His registers are full-bodied, and more colorful than we sometimes expect from a bass. He projected well in Powell Hall and connected well with the audience. At this performance, his voice seemed to embody drama more thoroughly than tonal warmth, but it could be argued that that is precisely what the score called for.

The beauty of the works selected lies in the fact that they challenge the ears and the intellect but do not alienate them. Audiences are remarkably resilient if they understand what composers are attempting to accomplish. Although the literary allusions helped convey the musical effect, each work on this program spoke with its own voice, standing upon the foundation of traditional musical language, yet building upon it and expanding it, each in its own way.