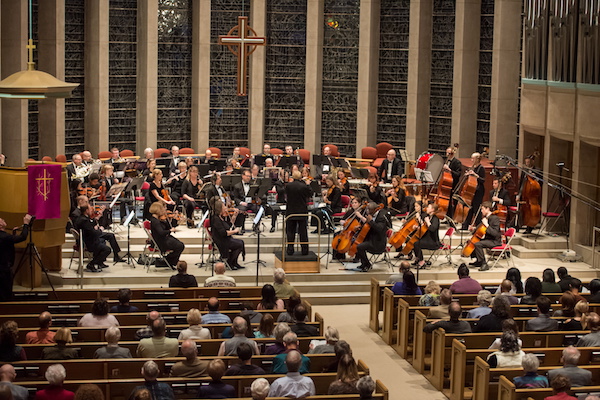 A kaleidoscope of diverse and talented soloists and a broad-ranging program, led by two conductors, combined to produce a spirited and intriguing concert by the Metropolitan Orchestra of Saint Louis last Sunday, March 5 in their home venue at First Presbyterian Church in Kirkwood.

In his remarks to the audience, Conductor Laureate Allen Carl Larson explained the uniqueness of several of the featured works, as well as the characteristics and challenges of the solo instruments involved. Today it is more important than ever to provide education and background to listeners, which is one of the most important and attractive components of MOSL's concept and mission. Not only does the orchestra provide background and knowledge, but it also offers a "Share the Music Stand" program in which gifted students are paired with orchestra members at rehearsals and concerts. This is music education at its very finest:  veteran performers in the orchestra teaching by example, and students learning by doing.

Harpist Megan Stout opened the program as soloist in the Danses sacrée et profane (Sacred and Secular Dances) by Claude Debussy, a beautiful work showcasing the strength, agility and sheer beauty of the instrument, for which Stout was amply suited. Benjamin Britten's remarkable Serenade for Tenor, Horn and Strings, featuring Peter Ulffers, horn, and tenor Keith Boyer. Drawing upon verses from major British poets, the cycle of songs requires performers with a wide range and warmth of tone. Ulffers and Boyer melded a beautiful lyrical counterpoint together; without such smoothness and rich sonority, this work would be cold and lifeless. But that was certainly not the case. Britten's score calls for both a field horn (no valves) as well as the modern concert horn.  The opening and closing sections of the work are played offstage by the field horn, creating a roving and dreamlike effect that provides a tonal backdrop to the poetry proclaimed by the tenor.

The program continued -- without intermission, which seemed entirely appropriate for such a musical showcase -- with clarinetist Jeanine York-Garesche performing the "Five Bagatelles for Clarinet and Strings" by the twentieth-century composer Gerald Finzi, arranged by Lawrence Ashmore.  The descendant of Italian Jews who settled in England, Finzi is well known for his numerous choral and vocal works. The Five Bagatelles are a beautiful set of short capricious works, full of melodic ingenuity and expressing various moods.  Along with all the featured soloists on the program, York-Garesche performed not only with a flowing, liquid tone, but also consummate technical skill. All musical instruments, and all human voices, must "sing," meaning they must perform with expression, dynamics, proper phrasing, rich tone and must be able to give the music wings to take flight on its own. All the featured soloists at this concert were able to successfully embody these characteristics.

The first three works on the program were conducted by Conductor Laureate Allen Carl Larson, perhaps the single guiding force behind the establishment of the Metropolitan Orchestra, ably assisted by Music Director Wendy Lea. In addition to his musical leadership that molds the entire ensemble into a cohesive, dynamically balanced whole, Larson also functions as an educator and commentator to the audience. Added to that is his deep commitment to nurturing young musicians. These traits combine to create an impressive mission statement for the orchestra.

Assistant Conductor Andrew Peters concluded the concert with Franz Schubert's Symphony No. 5 in B-flat Major, completed in 1916 when the composer was only nineteen. Since Schubert died at 31, somehow his inner spirit knew that he needed an early start. This symphony displays Schubert's uncanny ability to produce tuneful and soulful melodies, easily recognizable yet always original. The task of the conductor is to make sure that each melody must ring out clearly and sail into the listener's ears. Peters projected a solid understanding of Schubert's ideas and how they intermingle, making this work an excellent send-off for the enthusiastic audience.

The winning combination for this Metropolitan Orchestra program was its mixture of varied instrumental and vocal soloists, a wide historical range of musical styles, inclusion of works that appealed to audiences yet here and there gave just a bit of harmonic and melodic challenge, an affordable admission price, a hall that is large enough to accommodate yet still provides an intimate setting, and careful yet brief explanations and introductions of the pieces. This is what symphony orchestras were meant to be and why they are critical to the cultural life of every community.