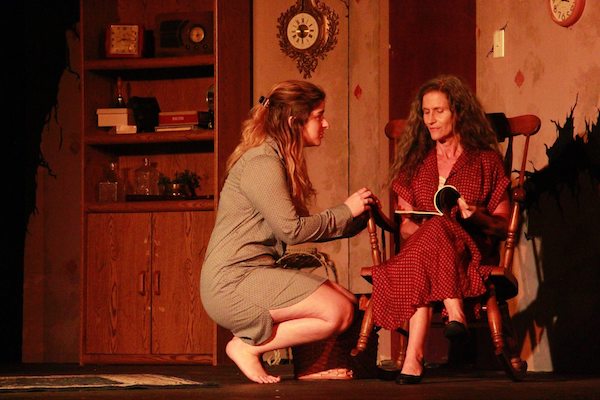 A Strange bijou from the Independent Theater Company

There's a definite gothic eeriness to the tale. There's the subtlest breath of Sam Shepard's ominous tattered rural American dreamscape. There are wisps of poetry -- or what we used to call "elevated language" -- and it's lovely. A new producing group, the Independent Theater Company, presented Scarecrow last weekend. It's brief -- just under an hour -- but it was truly compelling.

The play is by Don Nigro, one of America's most prolific playwrights, and it is at least seventeen years old. I so admire producers who can look beyond the flood of new "hot" scripts to see forgotten gems worthy of revival. Such is this Scarecrow.

As we enter we see the living room of a neglected old farmhouse. It's a lovely fragmented set; the irregular tops of walls, the great jagged cracks in the plaster give a strong sense of decay -- and of threat. The furniture is wooden, old, full of character. Everything is in gently coordinated earth tones. The walls are strewn with many clocks. There's a small thrust stage below the proscenium which serves for scenes in the corn field. Set designer Andrea Standby has done a wonderful job.

This is the home of Rose and her daughter Callie. As the audience enters Rose is seated, writing -- her book about evil. Out in the "cornfield" a young man slumbers.

Rose, who has not left the house in months, is neurotically protective of -- and dependent on -- her teenage daughter. Callie is desperate to escape and she often manages to meet her secret friend, Nick, the boy in the cornfield.

In that corn field an ancient (unseen) scarecrow presides.

Callie never knew her father; he's a mere mystery now. But he left Rose with a hatred of men, and she's desperate to imbue her daughter with that dark fear. Sex is bad: "It just makes more wet little things."

Hidden under Rose's bed is a treasure, all the money left them by Rose's mother.

The play has ancient pagan overtones. Nick is like the old Celtic "Green Man," a powerful, dangerous earth and fertility spirit. (And even his name hints at the diabolical.) There is a dark, lovely sense of Eros and Thanatos -- the union of Love and Death. It's all wonderfully pre-modern.

Margeau Baue Steinau does her usual beautiful work as Rose. Vast straggly hair bespeaks decades of neglect. Her Midwest rural dialect is perfect, and she is so convincing in her fearful obsession.

H. E. Robertson plays Nick. The use of initials cannot conceal what the smooth jaw and the treble voice so clearly announce: this is a woman. There are many roles where gender is really immaterial. This is not such a one. Nick must embody the dark tempting threat that male sexuality poses -- has eternally posed -- for women. Were this a larger, richer company -- or if Ms. Robertson had not been so gifted an actor (-ress?) -- I would have been ready to scold the director severely for such casting. But . . .

She enabled me to easily suspend my disbelief. She is so natural, so real. Bravo! (Brava!?)

Throughout the evening the lighting, by Karen Pierce, was quite beautiful: subtle, sensitive, evocative. Amazing work in this venue which is not overly equipped with lighting gear.

My hearty congratulations to director Britteny Henry for such careful, beautiful work. She also designed the very effective sound. She's a talent to be watched.