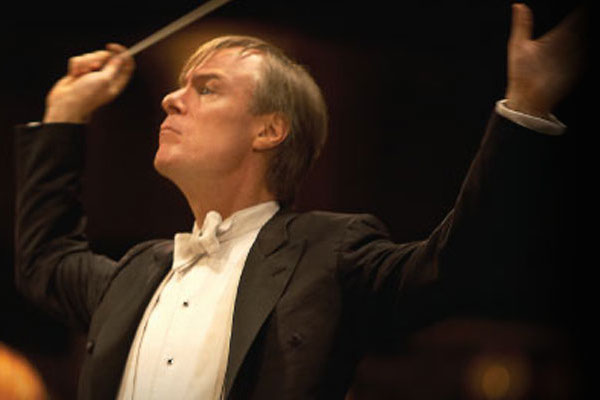 The St. Louis Symphony closes its season with a blockbuster 'Flying Dutchman'

The St. Louis Symphony Orchestra, like most major American orchestras, can generally be counted upon to deliver a blockbuster season finale. Last year it was Holst's popular suite The Planets paired with works by Berg and Vaughan Williams. This year (May 4th and 6th, 2017), it was another of the orchestra's forays into the world of opera: a complete concert performance of Wagner's 1843 opera Der Fliegende Holländer (The Flying Dutchman). And it was, as they used to say in Variety, boffo.

Written when the composer and his first wife were literally starving in Paris, The Flying Dutchman would prove to be not only Wagner's first big success but also the first opera for which he would write both the music and the libretto--a major step on the path that would eventually lead to the Ring cycle. "From here," wrote the composer in an 1851 essay, "begins my career as poet, and my farewell to the mere concoctor of opera-texts."

In fact, almost everything in The Flying Dutchman presages the route Wagner would take in his subsequent operas. There are individual themes (leitmotifs) for the major characters, a massive orchestra with a beefed-up brass section, and a libretto that deals with the idea of salvation through the self-sacrificing love of a virtuous woman--a theme Wager found fascinating. When Senta leaps to a watery death at the end of the opera, it's hard not to see it as a precursor to Brünnhilde's more elaborate fiery demise at the conclusion of Götterdämmerung. At least Senta doesn't take all of Valhalla with her.

It also has one of the best opera overtures ever written, vividly conjuring up images of storm tossed seas and ghostly ships--even if it is hard to listen to it without thinking of a certain Warner Brothers cartoon.

Add in the Gothic elements of the ghostly ship with its undead crew, and you have the makings of a potent evening of music drama. Which is exactly what we got Thursday night, thanks to strong performances by the orchestra, chorus, and soloists. That's because Maestro David Robertson, as he did with the SLSO's Aida two years ago, has once again assembled a cast of outstanding singers who are also capable actors.

Soprano Marjorie Owens, who was so striking in her local debut last year in Ariadne on Naxos at Opera Theatre of Saint Louis, impresses once again as Senta, whose dramatic sacrifice at the opera's close saves the Dutchman from his eternally cursed around-the-world cruise. The Act II ballad in which she tells the tale of how the Dutchman is cursed to sail the world forever until redeemed by love is an ingenious conceit on Wagner's part in that it serves both as exposition and insight into Senta's obsession with someone she has only seen in a painting. Ms. Owens infused it with real longing and delivered it flawlessly, building effortlessly to a powerful vocal climax.

Bass-baritone Alan Held, who got such great reviews in the SLSO's Peter Grimes in 2013, cut an imposing figure as The Dutchman -- menacing, stentorian, and tormented. He commanded the stage with his first aria, "Die Frist ist um, und abermals verstrichen sind sieben Jahr" (The time is up, and once again seven years have elapsed) and remained a magnetic figure throughout. A seasoned Wagnerian, his big, solid voice rode easily over the composer's massive orchestra.

Bass Raymond Aceto found the comic side of Senta's venial father Deland without overdoing it and, like Mr. Held, had a voice the projected strongly throughout the houses. Tenor Rodrick Dixon showed real passion as Senta's unfairly scorned lover, Erik, and did it with a clarion-clear voice. His cavatina "Willst jenes Tags du nicht dich mehr entsinnen" (Won't you remember the day you called me to you?) in the third act was a thing of beauty.

Tenor Paul Appleby shone in the small but important comic role of the Steersman. He thoroughly captivated the audience with his big Act I aria "Mit Gewitter und Sturm aus fernem Meer" (With tempest and storm on distant seas), in which his character tries (unsuccessfully) to keep himself awake during his watch by singing a cheerful song about the sweetheart who waits for him on shore. Soprano Joy Boland rounded out this excellent cast as Senta's nurse Mary.

Under Mr. Robertson's skilled baton, the orchestra gave a masterful account of the big, complex score, with expert playing by every section. Mr. Robertson brought out all of Wanger's drama and paced the performance in a way that kept the tension at just the right level while still allowing the quieter moments their due.

Originally produced for the Sydney Symphony's Dutchman in 2013, S. Katy Tucker's evocative animations--projected, appropriately, on large sails suspended above the orchestra--added to the theatricality of the evening, reflecting the changing moods of the music. Her close-ups of Mr. Held's face were especially striking. I was also very taken with the way in which her lighting design changed the color of the stage and the house to emphasize the dramatic action. This was most apparent at the very end, when Senta's sacrifice dispelled the Dutchman's curse and the entire hall was bathed in blue light as Wagner's music came to a tranquil close. It was a wonderfully effective moment.

Mr. Robertson made inventive use of the Powell Hall space as well, with offstage brass and, in the dramatic final scene, the choristers portraying the Dutchman's ghostly and ghastly crew singing from house left with megaphones to give their voices an eerie hollow sound. My only real issue with the evening was the forest of microphones on stage. They sometimes obscured the soloists, who sang from a raised platform behind the chorus at the very back of the stage. Still, their voices projected from there quite effectively.

The weekend's concerts opened with an emotional moment that had nothing to do with The Flying Dutchman but everything to do with the great work the orchestra has done over the years, as Mr. Robertson bade a fond public farewell to retiring percussionist John Kasica, who has been with the band since 1971. He has the distinction of having served under five different SLSO music directors (Walter Susskind, Jerzy Semkow, Leonard Slatkin, and Hans Vonk, in addition to Mr. Robertson) and, as his official bio notes, has the unique distinction of having had more solo appearances with major U.S. orchestras than any other percussionist in U.S. history. He'll be missed, but he got a great send-off.