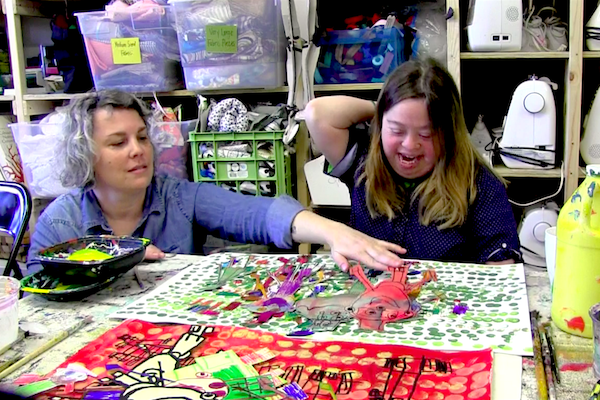 Gina Alvarez is the Executive Director at Living Arts Studio, a non-profit organization based in Maplewood that gives artists with disabilities a place to explore their passion for art. "We aren't approaching art as a rehabilitation or therapeutic tool," Alvarez explains -- nonetheless adding, "art does change lives." Given the freedom to express themselves and adapt to positive feedback, artists develop a unique confidence in their abilities: "They can initially walk in and think 'I don't know,' and then a year later say 'I am an artist.'"

When I visited the studio just before Valentine's Day, everyone was getting ready to show their love. Colorful heart-shaped balloons made the environment even homier, while fellow artists collaborated on a project in which they drew hearts in their own unique styles.

Aided by Alvarez, Living Arts not only facilitates art-making but also introduces artists with disabilities to a wider community beyond the studio. Member artists have exhibited their work at venues such as the Sheldon Art Gallery and the University City Library. For Alvarez, this represents the community-building promise of art: "The level of exhibition opportunities they are participating in is notable. I think that's huge. The sense of accomplishment anybody would experience with opportunities like that is tremendous." She also believes in the potential of her artists: "Pursuing exhibitions at high-calibre venues shows that people with disabilities can participate on that level, and should, and will."

Since joining Living Arts Studio in May of 2012, Alvarez has witnessed the progress her artists have made in their art careers. But more importantly, she is thrilled to see them gain community and friendship in the studio as they build trust between each other and with facilitators. "I don't think it's easy walking into any studio and agreeing to be part of something that you are not entirely sure what it is."

Living Arts Studio is always actively seeking methods to improve their programs and increase accessibility. "We work with cultural institutions through workshops, and see what accessibility looks like in programing, in art tools, and how you adapt tools to meet the needs of people with disabilities," Alvarez explained. The studio also uses the help of other institutions to "mould the programs into a more universal design." As Alvarez put it, "Through universality, there is inclusion."

Artist Larry Eisenberg has been part of the community at Living Arts Studio for over a year now. Seeing his father work on architecture design growing up, Eisenberg has taken to drawing houses and making art that shows a sense of space. "I am always looking for something that reminds me of landscape beauty," he pointed out. For Eisenberg, the freedom of creativity is expansive: "You never make mistakes because it doesn't matter if it it's art." Laughing, he added, "Nobody knows."

Melelani Perry, another artist, found belonging at Living Arts. When I asked Perry what the studio means to her, without hesitation she said, "Safe. Everyone is friendly and keeps us laughing."

Perry came to the studio two years ago wanting something different. She learned to sew and alter her own clothes. A recurring theme in Perry's work has been images of women. Using self-portraits or pictures from magazines or self-portraits, she bedazzles her women with colorful tapes, glitter and stickers. Inspired by Buddhism and the mandala, Perry often gives her women a third eye, a symbol of spiritual enlightenment. She also uses markers for exaggerated makeup, which adds a postmodern quality to her work. "I put myself in my art a lot. It's my signature," Perry explained. Alvarez added, "Because you are the one thing you know the best, right?"

The fulfillment Alvarez gets from her work goes beyond seeing the positive change art-making can bring to others -- it has also made her a better artist. "They work totally intuitively without criticism of their own personal process, often with reckless abandon. The freedom they have is extremely inspiring to me."

Producing sculptural objects and installations using ceramics, glass, fiber and print techniques, Alvarez has exhibited her own work in solo and group exhibitions at many venues, including the Contemporary Art Museum St. Louis, Gallery 210, Boots Contemporary Art, the Center for Creative Arts, Craft Alliance, the Des Lee Gallery, Pele Prints and fort gondo. She has received abundant recognition from both local and national organizations and has also curated many shows at these same spaces.

Besides her careers as an artist and director of Living Arts, Alvarez teaches at St. Louis Community College, Forest Park and serves as Executive Director of VSA Missouri, which promotes arts resources for people with disabilities.

Her path to Living Arts began when she was Gallery Director at the St. Louis Artists' Guild. While working there, she and the former Executive Director of Living Arts Studio and VSA Missouri curated an exhibition in the Sight and Vision series called Speaking Volumes, for artists Susan Shie, who is visually-impaired, and Richard Meyers, who is hearing-impaired. Through that experience Alvarez decided to come work at Living Art Studio.

Alvarez recalled how, with no background in social services, she went through a learning curve as she transitioned from a working artist to something of a community organizer, aided in part by her experience in the Regional Arts Commission's Community Arts Training Institute. But being an artist rather than a social worker has meant that she makes sure to treat members as artists first and foremost. Alvarez explains, "It has changed my personal practice to be less individual and more community-based. It has had an impact on me personally in ways I never anticipated as a working artist."