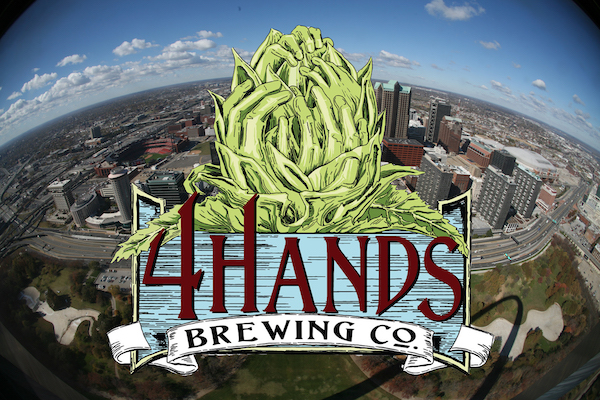 Last year, 4 Hands' City Wide release was celebrated with an Opening Day pub crawl through a number of bars around Busch Stadium, after having been sampled by many at the Lupulin Carnival a week earlier. Both the beer and the events signaled 4 Hands' commitment not only to the St. Louis region's beer-lovers but also to the broader community of St. Louis. With each purchase of a case of City Wide's tallboy cans -- the only way to get the beer -- the brewery donates one dollar to a non-profit changing quarterly throughout the year.

Kevin Lemp, founder, owner and native St. Louisan, has described the City Wide commitment as a civic duty: "I want it to be a better place tomorrow than it is today, and the only way we're going to make that happen is if we're focusing on our people and our community." Indeed, 4 Hands chooses non-profits sometimes an actual stones throw from where they operate, starting with Love Bank Park on Cherokee Street, where 4 Hands has its Think Tank sales and marketing office. Currently, purchases of City Wide support the LaSalle Park Neighborhood Association, but last quarter KDHX had the privilege of being the beneficiary of 4 Hands' determination to make their mark on St. Louis.

Many who tilt back a City Wide are likely unaware of the arrangement, since there is no messaging on the distinctive paper wrapper to indicate the donations. Many may have also missed the hands and fingers artfully designed into 4 Hands' hop logo, but the impact of charitable initiatives like City Wide are impossible to miss. This is especially so when you're part of an organization that has benefited from their charitable donations and new partnerships between 4 Hands and KDHX around events like Lupulin.

Other past beneficiaries have included Grace Hill, The International Institute, Great Rivers Greenway, and Big Brothers and Sisters. If one detects a pattern, it's because each year's selections include two civic, one environmental and one neighborhood organization. Within the list one also senses where 4 Hands' heart lies and the kinds of changes it supports in the community, from improved public spaces to community outreach organizations to the cultural growth of the city. For 4 Hands employees Lauren Schurk and Liz Swyers, both St. Louis natives, along with the majority of the 4 Hands family, the satisfaction they derive from the City Wide mission is as clear as their love of the city.

As Lauren (once an intern at KDHX) put it, the wonderful thing about St. Louis is the changes it welcomes: "It's been really cool to see it grow. When you go to school, everyone says you gotta get out of here, but when I returned after school, I saw so many community projects and all these people coming together around them." Lauren now sees a wave of recognition for St. Louis's food and music scenes rippling out from the city, and took satisfaction knowing that City Wide was part of that coming together.

As I chatted with Liz and Lauren around a wood table in the Tasting Room at the LaSalle Park brewery with its distinctive 4 Hands wallpaper, I couldn't help but think of the origin of the word "pub" in "public house" -- a place where all would be welcome -- and that didn't seem a coincidence. For Liz, great beer is a bond: "Our mission is about doing really great things in the community -- we're just doing that with beer, but beer connects people and organizations and events in so many positive ways." The charity initiative represented by City Wide certainly speaks to that role. Indeed, KDHX is proud to be rooted in the community alongside 4 Hands.