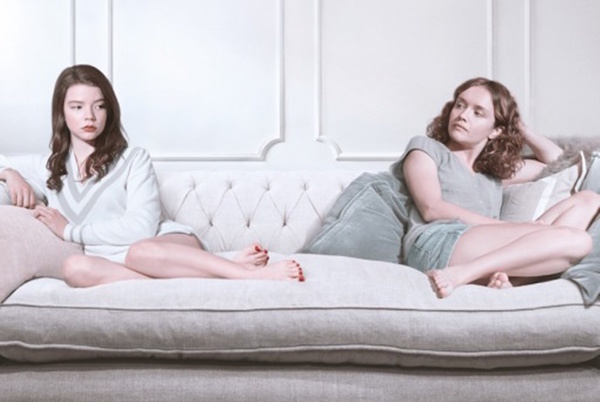 "Thoroughbreds" is one of those films that lives in its own hermetically sealed world, one that defies any suspension of disbelief. Two young women--Lily and Amanda--reunite as teenagers when Lily begins to tutor Amanda, as organized by Lily's mother. Amanda lacks emotions, is profoundly unresponsive, though she's learned to mimic those she observes.

At first slightly intriguing, Amanda quickly becomes an enervating, robotic presence. Lily, unsurprisingly, is attracted to her friend's cold-hearted approach to life, especially because she loathes Mark, her stepfather, a man who intrudes into several scenes only to establish his callous, obnoxious persona. Soon, plans to eliminate Mark take shape. Fortuitously and unbelievably, Tim, a ne'er-do-well drug dealer, arrives in a timely manner to help launch the nefarious plans. Two ugly murders occur during the course of the film, both, to my relief, kept off screen.

Set in an upper-class Connecticut milieu, it's difficult to identify with or care deeply about these teenage women. Anya Taylor-Joy as Lily and Olivia Cooke as Amanda give strong performances in the service of unsympathetic characters. Moreover, the timing diminishes any of the film's appeal given the recent, real-life, tragic murders by individuals apparently lacking the ability to empathize, as personified by Amanda here. Another day, another place, "Thoroughbreds" could have become a chilly, guilty pleasure along the lines of "Heathers" or "Heavenly Creatures." But all the characters need development beyond the cookie-cutter dimensions on display here.

"Thoroughbreds" is technically well made, with a camera occasionally moving almost imperceptibly in on characters and tableaus or striking an effective low angle perspective. However, style is not substance, and it suffers from its origins as a play. According to IMDB.com, first time writer/director Cory Finley, who has St. Louis roots, has expressed respect for Harold Pinter, and there is a hint of that drawing-room drama. Lest this review sound too dismissive, I must add that Finley shows very promising talent here and I do look forward to his next film. For "Thoroughbreds," check local listings.