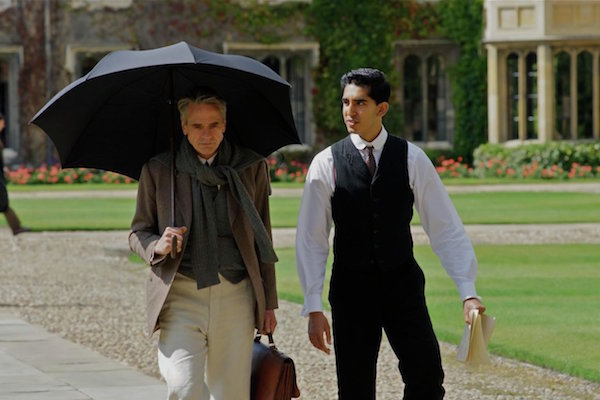 Srinavasa Ramanujan astonishes as 'The Man Who Knew Infinity'

Writer/director Matt Brown knows a great story when he finds one, and Srinavasa Ramanujan's certainly qualifies. As presented in The Man Who Knew Infinity, the story begins at Trinity College, Cambridge, England as G.H. Hardy, a member of the Royal Academy for his brilliant work in mathematics, remembers his most moving experiences with a formally uneducated shipping clerk from Madras, India.

As the story proper begins in Madras, India, in voiceover narration Hardy describes his relationship with Ramanujan as "the one romantic incident in my life." But Ramanujan's life in Madras poses sufficient hurdles to his intellectual progress, for even after Hardy invites him to Trinity College, Brahmin culture dictates against Ramanujan's travel. His lack of formal degrees and of thorough mathematical proofs causes further difficulties with his acceptance as his work, nevertheless, continues to astonish the best mathematical minds.

The performances by a superb cast provide the solid substance needed to give mathematics the gleam it deserves. As Ramanujan, Dev Patel has a three-dimensional role he can sink his teeth into. Jeremy Irons as G.H. Hardy delivers the gravitas and humanity he always brings. And Stephen Fry, Toby Jones, Jeremy Northam and Devika Bhise are excellent in supporting roles.