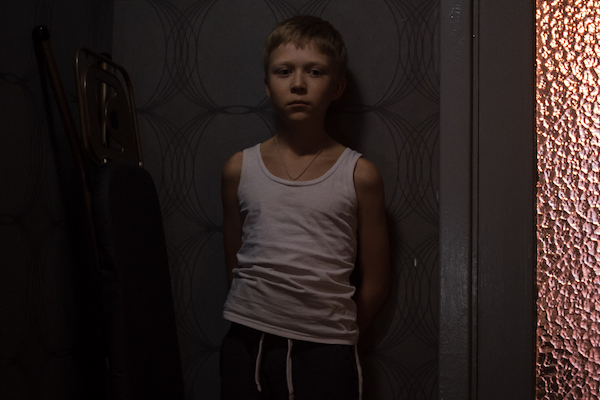 It's long and it's loveless and it's forlorn, this film  about a divorcing couple without a shred of affection for the son caught in the middle. It was the Russian nominee for Best Foreign-language Film of 2017, and it has merit, but it also has characters without much character.

Maryana Spivak plays Zhenya, a svelt woman with a spa to run. She's in great shape, physically, but, emotionally, she is so full of rage at her husband that she cannot look at him without boiling or seething or sniping. She has a lover, to whom she confesses that she got married because she got pregnant. Now that boy is 12, who even smells like the horrid husband.

Aleksey Rozin plays Boris, who also has a lover and who expects his wife to deal with their son's future. She counters his expectations, telling him pointedly that she no longer wants to clean up after his messes. Unspoken is her belief that their son is now his mess to dispose of.

These two shallow and hate-filled people discuss their son's future so loudly that Alyosha, played plaintively by Matvey Novikov, hears. He sobs solemnly. And then he disappears. His parents do not discover his absence for 48 hours because neither has been very responsible about knowing where he is anyway. They look for him as do platoons of volunteers called in for the task. But the parents are obviously in conflict: why find someone they won't know what to do with when he's found?

Andrey Zvyagintsev, known for "Leviathan," does not give these two any quarter. Although "Loveless" is filmed in color, it seems to be black and white. He directs it in real time, which means that for long periods the camera is simply locked down. "Loveless" is hard to watch, but it does encourage hugging every child you see afterwards.