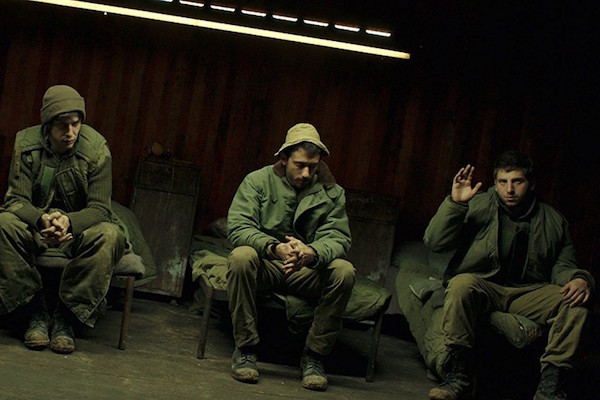 'Foxtrot' falls into three parts, each one an offering

The title refers to the codeword representing the letter F in telephone communication. It also refers to a ballroom dance in 4/4 time. Both meanings are made manifest in this tripartite Israeli film. "Foxtrot" begins in sorrow and ends in tears. Between is banal boredom, necessary though barely tolerable.

"Foxtrot" is about death, no two ways about it. The film opens with the announcement of a death, wherein the Feldmanns, mother and father, have to accommodate a child's death. Their son Jonathan is in the Israeli military, and the military has this announcement and the subsequent funeral organized to a fare-thee-well.

But then something alters, something jarring in the plot, something impossible. And the film switches to Foxtrot, Jonathan's military base. Boredom defines the men's actions in flashback. The metal container where they are housed is, significantly, sinking. One of the soldiers measures the list daily, but it's obvious from the camera angle that the young men are tilting toward the earth. And then, again, something jarring happens. The response by the military is equally jarring.

And, then, the film shifts back to the Feldmanns, post-mortem.

Filmmaker Samuel Moaz keeps his film at a tilt, with flashbacks and forwards playing havoc with the timeline, keeping the audience alert and wondering. In the beginning, Moaz keeps his camera close on the face of the father, played by Lior Ashkenazi, but pulls back to show the four young soldiers doing their duty. Moaz's camera embraces the parental units in the last third, their tangible anger explained finally in the end.

Moaz criticizes the Israeli army, which differentiates "Foxtrot" from "7 Days at Entebbe," which is little more than Israeli propaganda. "Foxtrot" signifies in each of its three parts, especially in the pathetic, nearly bathetic, ending. "Foxtrot"'s agenda is more about process than product. Take tissues.