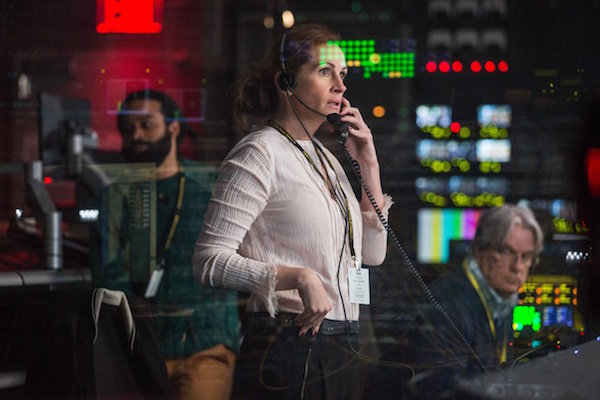 The topic is provocative, the stars top notch, and the director in comfortable command of her craft in Money Monster. In order, they are: a corrupt money investment scheme promoted by a glib cable host, stars George Clooney and Julia Roberts, with director Jodie Foster at the helm. On full, ostentatious display is the financial advice show Money Monster.

Its emcee Lee Gates (Clooney), more an entertainer than a sound analyst, evaluates and recommends capital funds. In Kyle Budwell's case, he invested his entire $60,000 inheritance in Ibis Clear Capital only to watch it tank due to CEO Walt Camby's programmed glitch in the trading algorithm. So Kyle takes a gun and an explosive vest to the television studio, cleverly outfoxes security, and takes Lee hostage with producer Patty Fenn talking to Lee in his earpiece, trying to keep him calm and the situation under control as the SWAT team swoops in.

For thrillers to work, the actors and pace must keep the tension at full throttle with periodic breathing room. At this, director Foster succeeds admirably, with brief cutaways to involve international programmers in Seoul, South Korea, and international exploitation issues in South Africa. She also expertly inserts reaction shots of Fenn, a superb Julia Roberts who, though largely chair bound in the studio control room, adds solid emotional moments. British/Irish actor Jack O'Connell plays Kyle with a feral intensity that has put him on my radar since seeing him in Starred Up and 71. All the supporting players turn in solid performances as well: Dominic West as the slimy CEO, Caitriona Balfe as Ibis Capital's spokesperson, Giancarlo Esposito as Captain Powell, and Lenny Venito as the central cameraman. The depth and expertise of the cast reminds me of old studio films with no weak links in the acting entourage.

That this takes place mainly in a claustrophobic TV studio adds to the pressure cooker atmosphere as Kyle channels some recognizable, perhaps even shared, anger and frustration. In addition, the alternating between an onslaught of noise and a nerve-wracking silence increases a feeling of unease. Suspend disbelief, sign on for the ride, and Money Monster offers a quick, entertaining hour and a half with a few stinging social jabs at culpable media, overwrought financial operations, and the gullibility of viewers. At area cinemas.