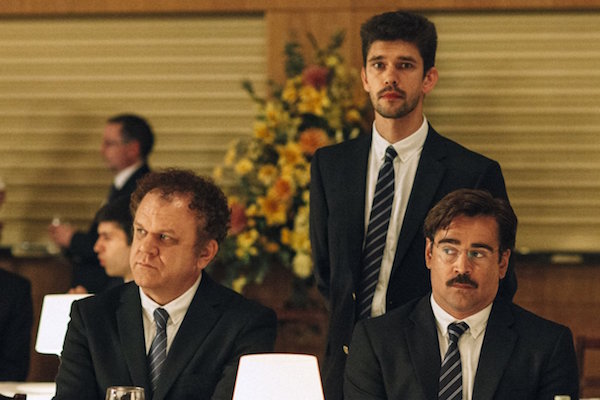 'The Lobster' offers a dark comedy in a dystopian future

In The Lobster, Greek director Yorgos Lanthimos envisions a dystopian society in which no one may remain single. When a partner dies or gets divorced, that person takes up residence at a lovely resort where a mate must be found within 45 days or the individual will be transformed into an animal of his or her choosing.

These State rules are explained to a recently divorced David upon his arrival. He chooses a lobster should he fail to find a match. Furthermore, any match must exhibit an equivalent flaw or handicap -- be it a limp or a lisp or sociopathology. Presentations by the hotel staff argue for the advantages of two people: someone to deliver the Heimlich maneuver or to avert a rapist. On regular forays into the nearby woods, these residents hunt "loners"--those who have escaped the totalitarian regime. But these loners have equally rigorous conformist rules with dire punishment for any disobedience such as dancing with another person or, horrors, falling in love. Visits to a nearby city add more grim encounters.

In his first English language film, co-writer Lanthimos with his frequent writing partner Efthymis Filippou, satirizes societal attitudes and the inflexibility of the power brokers as well as those purportedly challenging rigid dictates but succumbing to their own equally oppressive ones. A narrator, one of the loners, occasionally adds descriptive commentary throughout events, all of it and all conversations in Brechtian monotones, the speakers out of touch with their own feelings. Only dramatic, loud music relieves this enervated world as entrapment rules in the hotel and the woods, but even those few scenes in a lovely, open landscape feel confined.

As the architect David, Colin Farrell gives an unexpectedly restrained, brilliantly undemonstrative performance. Supporting actors are also remarkable: Ben Whishaw, John C. Reilly, Rachel Weisz, Olivia Colman and Léa Seydoux. Were they not so impressively solid, the unhurried pace of this two hour film would take its toll since Lanthimos likes his slow motion, especially in the hunting scenes. But he calculates exactly right, letting the humor emerge as an integral element as, for example, a flamingo or a camel wanders by, or even that David arrives with a border collie, his brother. The Lobster is a masterpiece of dark comedy and metaphor. At a Landmark Theatre.