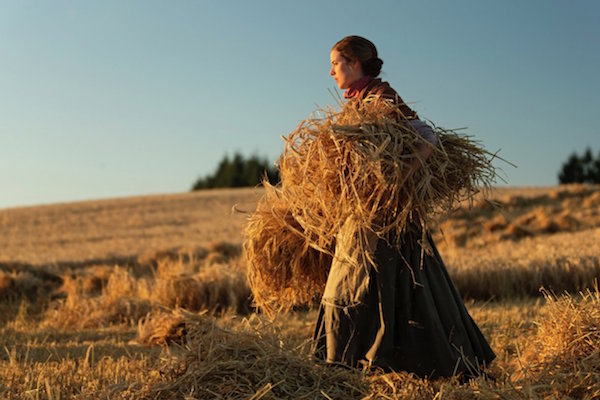 Rarely has a film shown such contrasts. Sunset Song photographs the beauty of Scotland as a country, and cinematographer Michael McDonough also exploits light and shadow, mist and candles to add dimension to the story. Concomitant with that beauty is the plainly disquieting and repugnant violence of early 20th-century life.

The film is based on the first of a trilogy of novels, called A Scots Quair by Lewis Grassic Gibbon, a pen name for James Leslie Mitchell, born in Aberdeenshire. An earlier mini-series adaptation Sunset Song played on Masterpiece Theatre 40 years ago. Over weeks, the characters had the time to build sympathy. Here, under the direction of Terence Davies, who also directed The House of Mirth, the characters in the two-hour Sunset Song demand attention more than elicit it slowly.

Chris Guthrie is the daughter of a tyrant farmer father and an overworked, child-bearing mother, who suffers at the demands of her horny husband. Gibbon told Chris' story from 1910 until the end of the Great War. In those years, she buries her parents, marries her lover and bears his son; her husband goes off to war and comes back traumatized. Meanwhile, Chris works like a dog, milking and cleaning. All the study of her young years, her hopes of being a teacher in Scots and English languages, have faded into the mists. What lasts is the land and only the land. Chris's fortitude in the midst of misery carries her through both microcosm and macrocosm of her world.

Much of the Scottish tongue is impossible to understand, but where the words lag, the pictures fill. Davies' direction makes Sunset Song meaningful.