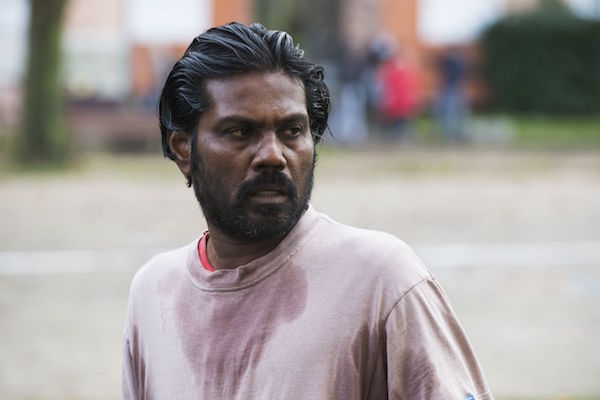 The cliché is that a family is a circle of people who love you, but for these three--man, woman, and child--a family comprises what it takes to emigrate from Sri Lanka to Paris. Dheepan, a Sri Lankan Tamil warrior finds Yalini, whom he takes as his wife for now.

He exhorts her to find an orphaned child to make their "family" look believable to authorities, and she picks the beautiful, intelligent Illayaal. The three are settled outside of Paris.

Immigrants do not get the chance to live the good life, often living in areas pocked with poverty, its own kind of war. Dheepan becomes a caretaker of an apartment complex, and he soon realizes that there is a drug war going on, another war he wants nothing to do with. Plus, more immigrants from Sri Lanka, including his former enemies, present horrible challenges to him as does his war-traumatized mind.

Meanwhile, Yalini has become a carer for an old man, whose apartment is filled with parolees and druggies. And then there is school for Illayaal, where she is shoved around like garbage.

The only joy these immigrants feel is when they break bread with others of their ilk and plight.

Director Jacques Audiard, who directed Rust and Bone, helped write the screenplay for Dheepan.  He focuses on the life of this fake family--right up until the epilogue. Those last sunny minutes are wide open for interpretation--a dream, a future, a lark?

Jesuthasan Antonythasan, who was also a Tamil Tiger, performs so believably in his premiere as an actor. Kalieaswari Srinivasan carries forth the role of the non-maternal mother. And Claudine Vinasithamby makes the young woman sympathetic.

Dheepan, which won the Palme d'Or at Cannes, proves that war for some immigrants is not ever over.