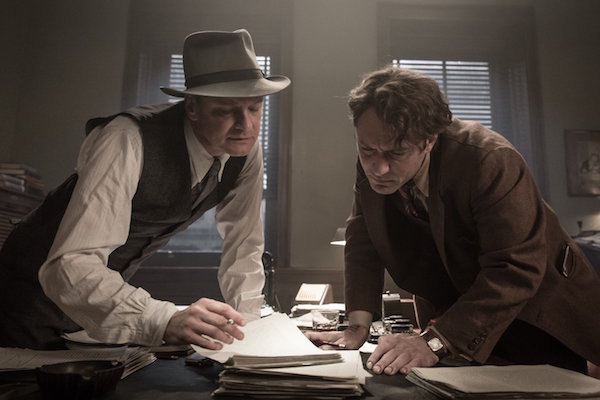 'Genius' wanders away from the crux of story

For those of us who love the editing process in our own work and that of others, the story of Max Perkins as editor to the stars of White Male American Fiction of the Fifties is a classic. So how come Genius just does not make our editors' hearts tattoo?

Celebrated by A. Scott Berg in the masterful biography, Max Perkins: Editor of Genius, Perkins played a significant part in moving the novels of Hemingway, Fitzgerald, and Wolfe to the bookstores. Genius looks at the roles played by Perkins and the genius Thomas Wolfe. Perkins saw promise under the mounds of purple prose that formed Wolfe's draft of O Lost, which they retitled Look Homeward, Angel. Perkins followed up the recommendation of set designer Aline Bernstein, Wolfe's mistress, to read the work-in-progress. He reads the first line with Wolfe's voice-over: "A stone, a leaf, an unfound door."

Genius follows Perkins' unstinting work on that book as he and Wolfe develop a father/son relationship, to the detriment of his life at home with his wife and five daughters and of Wolfe's love affair. It would be hard enough to make a scintillating film of the editing process, and as his first directorial effort, actor Michael Grandage barely succeeds.

The film, set in 1929, looks right due to Mark Digby's art production, but it never feels right. Maybe that's because most of the cast is British, save for Laura Linney, who tries, as Louise Perkins. Colin Firth, who lived in St. Louis in the fifth grade, plays the ever-hatted Perkins and Jude Law plays the wordy Wolfe, who lived in St. Louis with his mother, who ran a boarding house during the 1904 World's Fair. Nicole Kidman is solid as Bernstein; Guy Pearce and Dominic West make cameos as Fitzgerald and Hemingway. Genius is a work of admiration and curiosity, but it is simply not a work of genius, so that's regrettable.