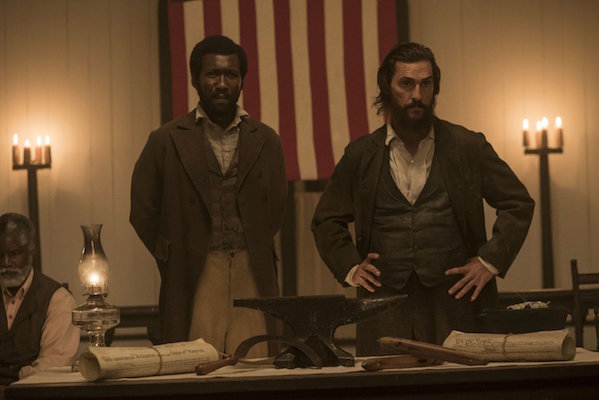 Some stories just never make it into the American history books, either because there's simply not time or space or because the books are written by committees with agendas that blot truth. Free State of Jones tells such a story of Newton Knight of Jones County, Mississippi, during and after the Civil War.

Knight represents factions during that bloody conflict--poor folk, both men and women, whites and blacks--who were tired of fighting for plantation owners, made rich off the backs of slaves. The small farmers were tired of being robbed of all they had to finance and feed that war. They were tired of defending the slave-owning society to support the cotton culture. One soldier avers that he's not fighting for cotton but for honor.

Knight deserted his post as a hospital worker and fled to a swamp already inhabited by men of color. One, self-named Moses (played by Mahershala Ali) becomes Knight's ally, as does a house slave played by Gugu Mbatha-Raw ("Belle"), who becomes Knight's paramour. Knight, played so well without ego by Matthew McConaughey, is a gentle man: the way he calms and caresses children shows this. Knight is a natural leader, magnetically drawing his kind.

Director Gary Ross (who wrote Seabiscuit) continues Knight's story post-war instead of ending of a boffo battle. Ross co-wrote the script with Leonard Hartman and extended it intelligently into the 1950s in a trial of miscegenation for Knight's descendant.

What does not play so true is the production value of Free State of Jones. So often the acting and enacting are wooden, the make-up a few smears of mud on a face. The film could have used subtitles, for the men's mumbled Southern accents are muddy, too.

Free State of Jones lays out a morsel of history too often consigned to the swamps of Mississippi.