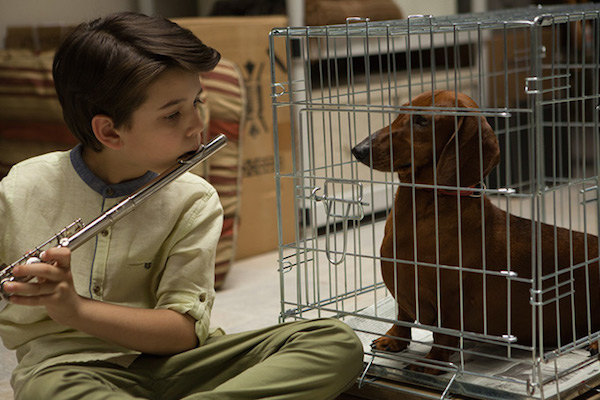 Writer/director Todd Solondz offers no conventional optimism in his films centering on human interaction. Emphatically unique and quirky, Solondz resists any temptation he might feel to brighten his pessimistic view of contemporary society, as he proves yet again in Wiener-Dog. Sometimes his unsettling stories prompt amusement or reluctant acknowledgement of his perspective, but not this time.

I find little to recommend Wiener-Dog beyond the great cinematographer Ed Lachman's outstanding work in this joyless, even cruel, series of episodes linked together by Wiener, a lovely dachshund, moving from one owner to another. Her first owners get Wiener as a present for their young son Remi, a cancer survivor. After Remi feeds Wiener granola bars and Solondz spends minutes surveying the resulting feces, the dog gets the boot.

Vet tech Dawn Weiner, called "Wiener Dog" herself in Solondz's 1995 Welcome to the Dollhouse, rescues Wiener who goes on a boring road trip with her and a former friend and drug addict. After the only amusing interlude in the film -- an intermission with Wiener walking across multiple computer generated landscapes, Wiener ends up with Dave Schmerz, a condescending film scriptwriting professor and would-be author of his own screenplays. And in her fourth iteration, Wiener lands with a blind, caustic older woman.

If any of that sounds like entertainment or insightful observation, I couldn't find it, though the cast does a fine job with what they're given. They include, in appearance order: Julie Delpy, Tracy Letts, Greta Gerwig, Danny DeVito, and Ellen Burstyn. In addition, this idea of following the fortunes of an animal as she moves through a challenging life has pedigree, most famously for film fans French director Robert Bresson's 1966 Au Hasard Balthazar, focused on a donkey's fate.

In episodic films, a nonjudgmental distance often works well, but indifference to pain and suffering of the central character leaves me cold. And the ending here is incredibly pitiless, leading me to warn this is absolutely not for children. Solondz has said he made Wiener-Dog because "I've never made a dog movie." I wish he'd left it at that. At Landmark's Tivoli Theatre.