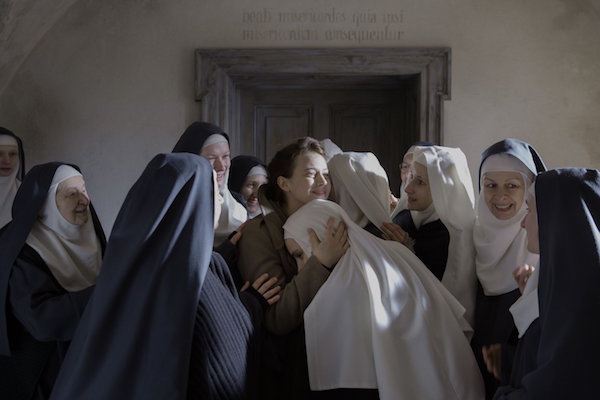 Convent bells ring as nuns chant, credits announcing Poland, December 1945. A young Benedictine nun slides out a side window, hurries to a nearby village and bribes children playing in the snow to take her to a French doctor, not a Polish or Russian one. That Red Cross doctor Mathilde rehabilitates wounded French soldiers for repatriation to France.

Thus begins director Anne Fontaine's The Innocents, based on actual events. Mathilde is needed to deliver babies at the convent where, prior to the retreat of the German soldiers and then when the Russians arrived, nuns were repeatedly raped. Each of them presents a different reaction to her situation, allowing an exploration of faith and resiliency. The antipathy to religion of Poland's Communist régime dictates secrecy for Mathilde and considerable danger if discovered for her and the convent.

Told entirely from Mathilde's point of view, she becomes our surrogate for the gradually revealed events that will also involve Soviet soldiers controlling the area and fellow Jewish doctor Samuel, whose family died in concentration camps. The screenplay adapted by Fontaine and Pascal Bonitzer maintains the dramatic tension punctuated with time for reflection as the nuns pray and sing, hanging on to and asserting their faith. Contributing to this aesthetically accomplished work is the solid cinematography and framing by Caroline Champetier. Shooting at an abandoned Polish convent, Champetier uses inner framing to communicate entrapment. Employing chiaroscuro lighting, she borrows from 14th century paintings to inform her meticulous art direction.

The Innocents was inspired by the 1945 notes of the real Dr. Madeleine Pauliac, the truth more tragic than that depicted, with 25 nuns raped, some as many as 40 times and 20 nuns killed. Director Fontaine writes that we must remember that women in war zones remain subjects of such brutality. The Innocents calmly and intelligently dramatizes this reprehensible victimization too often elided from history. It is, above all, a study of faith and a powerful film. In French and Polish with English subtitles. At Landmark's Plaza Frontenac Theatre.