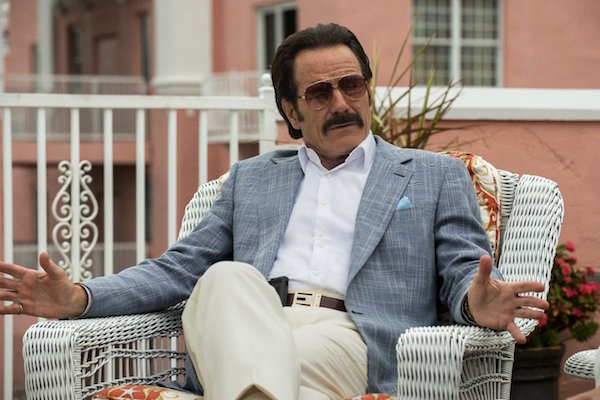 'The Infiltrator' goes deep undercover to dramatize the emotional toll

The opening titles of The Infiltrator forcefully announce: 1985, the Medellin Cartel smuggles 15 tons of cocaine into the U.S. a week, valued at more than $500 million. But after spearheading the seizure of one such huge shipment, U.S. Customs agent Robert Mazur realizes that he's targeting the wrong choice—the smugglers. It's time to go after the money.

After surveying a cemetery's potential candidates, with the invented identity of Bob Musella, Mazur goes deep undercover. With volatile partner Emir, they weasel their way through Pablo Escobar's hierarchy, gaining respect and even affection of the drug kingpins. Through a dizzying series of encounters, parties, and increasingly important—and frightening—meetings, the question becomes how well Mazur can keep his two worlds apart: that of the wife and family he loves and the criminals he's enticing into revelations and, eventually, he hopes, incarceration.

Ellen Sue Brown's superb screenplay is based on Mazur's book detailing his experiences. She doesn't belabor the obvious or the familiar. After all, we've all seen many television series and films devoted to drug trafficking, exploiting our fascination with greedy, egotistical, violent individuals. Those elements are here and clear, but wisely director Brad Furman keeps the focus on the emotional tightrope undercover men and women walk, knowing, as Mazur says, one slip and you're dead.

Given this emphasis, The Infiltrator succeeds because of Bryan Cranston as Mazur. As he proved season after season in the phenomenal Breaking Bad, Cranston reveals every nuance through the timing of his line delivery, every muscle of his face, his nonverbal energy or lack thereof, and his eyes—always the eyes. This is an Oscar worthy performance beautifully supported by numerous good actors; for example, he's joined by John Leguizamo as the explosive and unpredictable Emir. Diane Kruger is Musella's invented fiancé Kathy, who also must negotiate one land mine after another. Benjamin Bratt presents a slick veneer as a drug kingpin. Amy Ryan is a no-nonsense boss, and Olympia Dukakis has a great time as Bob's aunt though each merited much more screen time.

The Infiltrator manages a difficult task, making a familiar genre engrossing and entertaining because of its terrific script and acting. At several area cinemas.