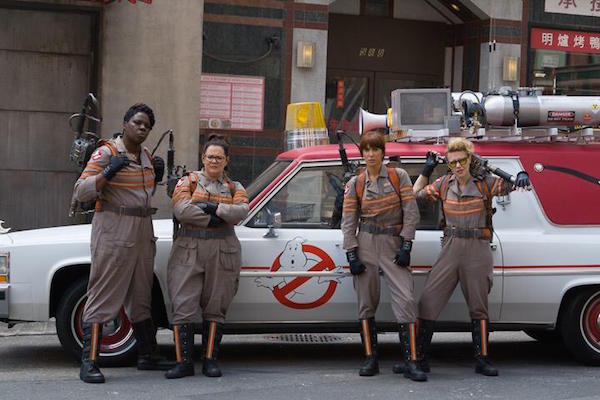 Take a quartet hell-bent on ridding Manhattan of ghosts and you're bound to find a motley crew who believes, first, that ghosts exist and second, that the foursome can destroy same with just a bit of ingenuity and stick-to-itiveness, perspicacity, and dedication. Make this quartet women and hilarity ensues.

This group of Ghostbusters comprises a scientist, an engineer, a dreamer, and a ticket taker on the MTA. Erin, the scientist, is trying for tenure at Princeton by kissing professorial posteriors. One mention of the book she wrote with the dreamer years ago and she can kiss her career goodbye. The dreamer is cajoled into welcoming her back into the fold that includes one crazy engineer, Holtzmann. And into their little troika comes the dainty giant, Patty, who believes in ghosts because she saw one in the underground.

Armed with yellow-goggled Holtzmann's weapons, the four proceed to hunt for and down ghosts. They slither into the subway, they invade a concert (Ozzy Osborne!), they tour a haunted house— the basics of ghost-catching.

But Ghostbusters, as directed by Paul Feig and written by him and Katie Dippold, is not about plot, but about seeing how the actors interact with each other and the special effects. Feig keeps the reins on Melissa McCarthy, which is good, and even on Leslie Joness—either woman capable of stealing the show. Kristen Wiig plays a constipated scientist without overacting. Kate McKinnon is simply marvelous as Holtzmann! Please cast her in every movie forever!

They are supported by handsome Chris Hemsath as the receptionist (his interview like the ones Murphy Brown had to conduct), Matt Walsh, Andy Garcia, and the sassy Cecily Strong. But look for the dandy cameos, and, oh, stay for the credits.