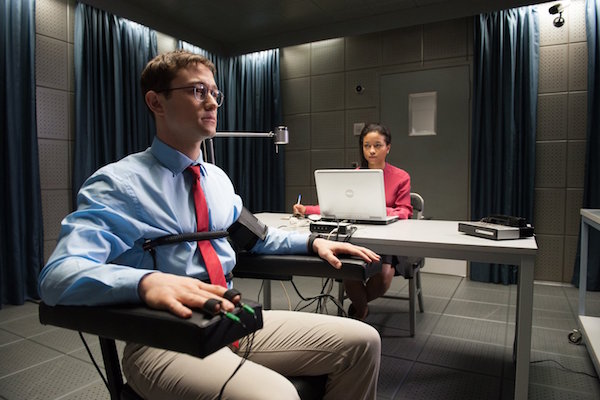 'Snowden' offers an apologia for transgressions

For comparative purposes, Snowden should show on a double bill with Citizen4. That way, audiences could discuss the differences between a documentary take and a feature film version of the same story. Audiences could concentrate on that instead of worrying about politics. But the story of Edward Snowden is a political story.

Writer/Director, Oliver Stone's take embraces Citizen4 from the very beginning with filmmaker/ journalists, Laura Poitras and Glenn Greenwald, nervously waiting for the sight of the man who made public the truths about the National Security Administration's recordings of Americans' lives. When Edward Snowden walks through the hotel lobby, he is fiddling with a Rubik's Cube, the kind of toy that engages the genius' mind. Watch that cube: it comes around again and again, both as symbol and as storage secret.

Director Stone wrote the script for Snowden. He based it, in part, on the biography by Snowden's Russian lawyer. He shot it largely with digital cameras, which, heretofore, he has used for documentaries. Stone shows the interviews among Snowden, Poitras, Greenwald, and a reporter from The Guardian, well played by Tom Wilkinson. He alternates those with scenes from Snowden's life in the military, with the CIA, and with his geeky girlfriend, a pole dancer/photographer, played well by Shailene Woodley. Stone follows Snowden as his conservative politics shift from negative to positive, while staying true to patriotism as he defines it.

Joseph Gordon-Levitt stays true to the Snowden character as revealed in Citizen4. The supporting cast -- Rhys Ifans, Joely Richardson, and Zachary Quinto -- is led brilliantly by Melissa Leo, ever maternal as Poitras. "Snowden" is definitely an Oliver Stone movie, for it asks the audience to question and seek.