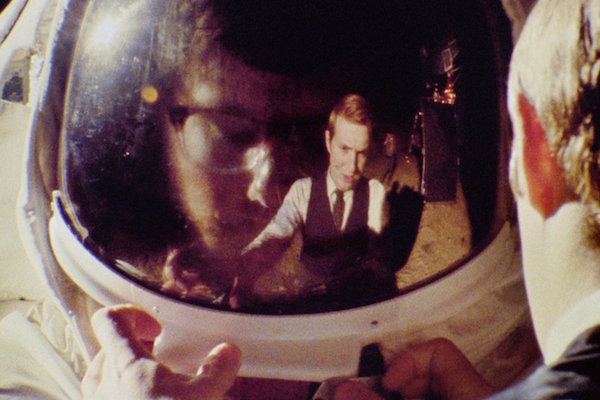 'Operation Avalanche' sinks under its own conceit

The mockumentary Operation Avalanche asks and answers the question, "What if the CIA in the 1960s felt so driven to beat the Soviet Union to the moon that they aided two unhinged, fake documentary filmmakers in staging scenes for NASA?" Director, co-writer/actor Matt Johnson invents exactly this convoluted scenario with two Ivy League students recruited to find a NASA mole.

Beginning in 1965, Matt Johnson and Owen Williams infiltrate the Apollo mission projects, surreptitiously hear that NASA fears they will lose the moon race, and plot and produce phony moon footage for Apollo 11 to transmit faking an astronaut walking on the moon. Several threatening developments add intrigue and danger, with another layer of complexity using shots from Georges Méliès' 1902 A Trip to the Moon, archival footage from the '60s, including of President Kennedy and Walter Cronkite, among others, and a subplot focused on Stanley Kubrick's "Dr. Strangelove" and "2001: A Space Odyssey." This mockumentary borrows unabashedly from a hodgepodge of sources, all in the service of a rather lackluster presentation indulging the conspiracy theories we've all heard.

Technically, Operation Avalanche opts for the now passé, immensely annoying handheld style. The camera zooms in to out of focus shots, then regains focus, think Blair Witch Project. The jittery camera pans and tilts past nothing of any interest. Numerous reaction shots quickly become grating instead of cute, with Matt Johnson in particular mugging to the audience, so reminiscent of television's The Office. All I wanted to do was insist cinematographers Andrew Appelle and Jared Raab get a tripod and keep the shots sharp and solid instead of headache-inducing movement.

Shot on grainy 16-mm film to imitate the 60s time period, this self-conscious style weakens the story's momentum. I must also add that imdb information describes director Johnson contacting NASA as a real documentary filmmaker and being allowed to shoot footage in the Lyndon B. Johnson Space Center, and then included the film. This is completely unethical and an affront to honest documentarians. Operation Avalanche is a one-trick pony. At a Landmark Theatre.