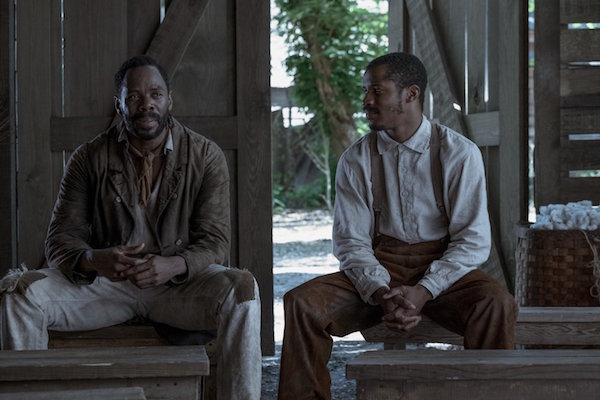 Over two hundred black men and women of all ages were casualties: executed outright, tried and hanged, beaten and tortured, traded to owners in other regions or states. Nate Parker's The Birth of a Nation dramatizes plantation slave Nat Turner's experiences leading to this uprising. Director, writer/producer and star, Parker purposely invokes D.W. Griffith's 1913 racist film of the same title which glorified the KKK's formation. Showing restraint himself, Parker prefers suggesting rather than explicitly depicting most of the horrific barbarity against the slaves, though there's no question about inhumane treatment, including rapes, whippings, beatings, and pervasive humiliation. Proving less can be more, one of the most haunting, chilling images shows a white girl running out of the front door of her beautiful home with a black girl running behind her at the end of a loosely held rope, a noose around her neck.

While Nat was literate and an effective preacher, Parker uses poetic license, as almost any historical drama does. In the film, Nat's owner Sam Turner is paid for Nat to deliver sermons to rein in disgruntled slaves. Parker imagines hallucinatory nightmares for Nat and includes scenes of African shamanic activity. Contrary to history, Parker shows Turner nobly surrendering when he learns of unmerited attacks on innocent blacks. In fact, Turner was captured when a farmer accidentally stumbled upon him. Along those lines, except for Nat's ineffective owner, a composite of several he had, the white men come off as malevolent caricatures. To Parker's credit, the slaves' lives show the complexity seldom granted them. Similarly, though the romance is completely traditional, it's also fresh in that it's granted to slaves.

On balance, in a powerful, rousing film, The Birth of a Nation tells an important story, one too often ignored in history. Let's hope its plea for humanity and peace for all impacts and improves on today's injustices. Check local listings.

Footnote: Nate Parker has himself has been the subject of controversy. In 1999, as a student at Penn State, he was charged with rape but was subsequently found not guilty in court. The woman who charged Parker and his friend committed suicide at age 30. Because this has received attention from 60 Minutes, among other places, I add this in the interest of clarification should readers hear about the controversy and want to pursue more information.