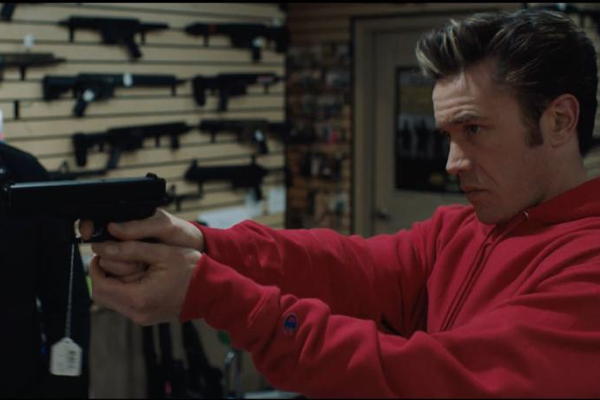 Villains, especially fascinating con artists, often dominate a film’s dramatic focus. They’re the dynamic, mesmerizing characters with charisma, or how else would they succeed? The iconic Alfred Hitchcock used this often, commenting that the most successful criminals presented a disconcertingly engaging façade. These ideas govern writer/director Matthew Gentile’s “American Murderer,” based on the true story of conman Jason Derek Brown.

In the first scene, 2004, Jason attempts to deceive a pawn shop owner, thereby immediately and clearly establishing his devious role playing in his efforts to manipulate strangers, friends, and family to give him what he needs. That’s usually money but sometimes sex and a place to stay. In an energetic, bravura performance, Tom Pelphrey as Jason shape shifts through several manipulative strategies, offering insight into the deliberate, all abhorrent and unscrupulous, ways to hoodwink others. Only Jason’s mother Jeanne (a terrific, as always, Jacki Weaver) is wise to him and explicitly confronts him, to no avail.

What adds density to Jason’s increasingly violent behavior is the nonlinear structure of events, that is, we gradually learn about some of his influences and the reactions, often accommodation, of those important in his life, notably his brother David and sister Jamie. Also important in a supporting role is the neighbor Melanie, much too enabling and giddy over Jason. Across the board, except for mother Jeanne, the women lacked intelligent complexity, still much too often the emotional patsies. In a parallel subplot, the FBI works to catch this man on their Top Ten Most Wanted list. In that thread, Special Agent Lance Leising, played by a restrained Ryan Phillippe, follows clues with frustrating outcomes.