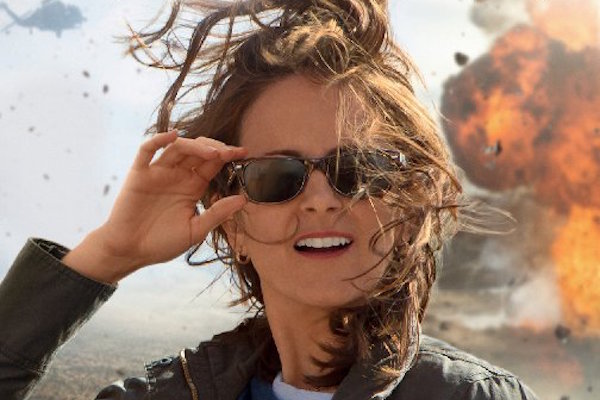 The title's code words represent initials for an exclamation of dismay. Those words accompany every step of this revealing and often riveting film about a journalist in Afghanistan in the first years of this century. The film stays strong as does the protagonist, flung into the field from a boring desk job.

Kim Baker was childless and unmarried in 2003 and, therefore, ripe for a field assignment. She arrives in Afghanistan with a screaming-orange backpack and enough moxie to stay the course. She just doesn't know what the course is going to be. As a newbie newswoman, sprung from the copy desk, she has to navigate a foreign country where women are burka-ed and belittled. At the same time, she has to negotiate the competition of the news industry, at home -- now Afghanistan -- and back home.

She meets other journalists and shooters, their tongues a polyglot of accents. She meets guards, guides, generals, the enemy. She meets her courage, soon revved up as that of the adrenalined character played by Jeremy Renner in The Hurt Locker.

This film has been sold as a bosom-buddy movie, with the stars Tina Fey and Margo Robbie as snipers. It is much more than that, much more than one-liners, spruced up by writer Robert Carlock from Baker's bio. Whiskey Tango Foxtrot presents Fey in the role of a woman coming to terms with herself, both as the character and as an actor amid a stellar cast. Alfred Molina plays politician; Cherry Jones, a network exec; Martin Freeman, a swain; Josh Charles, a cad; and Billy Bob Thornton, a Marine. But this film is Tina Fey's, and she doesn't waste time or space in telling Kim Baker's story of a stranger in a strange land of war.