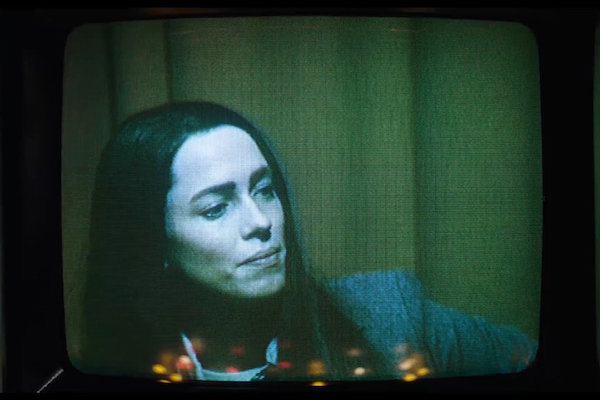 The film simply titled Christine offers an absorbing, at times mesmerizing, and ultimately mystifying character study. How could anyone wholly explain Sarasota television reporter Christine Chubbuck's live, on-air suicide in 1974? But credit to director Antonio Campos who carefully charts the nooks and crannies of Christine's complex, troubled personality and Rebecca Hall in an Oscar worthy performance.

With Christine anchoring every scene with only a few exceptions, Hall must segue convincingly through vulnerability informed by determination, ambition struggling with paralyzing stress, and assertiveness undermined by self-criticism. Hall is pitch perfect: clashing with her unhelpful mother Peg with whom she still lives, arguing with TV station boss Mike who channels his own '70s sexism, attracted to on-air anchor George but incapable of relaxing with him, and cool to her colleague Jean who tries to show support. Hall's stiff body posture, slightly tense jawline, and arrhythmic delivery communicate one aspect of Christine's persona. This contrasts with the calm, relaxed, modulated verbal and nonverbal presentation when Christine performs with her hand puppets for children at local hospitals.

Through a 70s television monitor, director Campos introduces Christine, practicing and questioning her interview technique. And the demands of if-it-bleeds-it-leads journalism is never let off the hook as Christine argues for more than her human interest beat. As the station boss, Tracy Letts expresses a simmering and at times explosive frustration with Christine. Equally good are Michael C. Hall as TV anchor George, Maria Dizzia as colleague Jean, and J. Smith-Cameron as the mother. The art direction expresses Christine's demoralized moods with muted colors from costumes to surroundings.

Most important for this subject, Campos refuses to sensationalize the suicide, focusing instead on effecting an empathetic approach to Christine. He watches the reactions and ineffectiveness of everyone involved up to their shock at Christine's action. I thought of the disbelief and distress expressed repeatedly when individuals act out in violent ways. Christine sheds light on one such person without pretending we can ever quite understand. At Landmark's Plaza Frontenac Theatre.

Footnote: At the 2016 True/False Film Fest, director Robert Greene also took Christine Chubbuck's suicide as his subject matter. From another perspective, in Kate Plays Christine he investigates the event through Kate Lyn Sheil who is playing Christine Chubbuck in his film. Ethical concerns over dramatizing this event and the toll it takes for Sheil to play Christine add more layers to remembering such a horrific event as Chubbuck's suicide. Kate Plays Christine will screen at the St. Louis International Film Festival, held November 3 to 13.