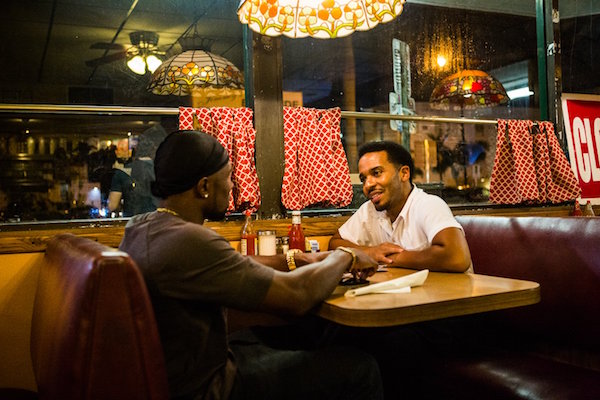 When ten-year-old Chiron first appears in Moonlight, he's fleeing bullying boys, taking refuge in a derelict apartment. In fact, literally or metaphorically, Chiron runs full tilt physically and emotionally for most of this story told as three chapters in his life: as a boy called Little, as 16-year-old Chiron, and as a young man called Black.

Figuring out and accepting he's gay, Chiron relishes the mentoring of drug dealer Juan and his girlfriend Teresa, endures his mother's mood swings, and wrestles with his crush on schoolmate Kevin, with whom he later, briefly reunites in a heart-breaking scene. Throughout its deeply moving character study, with an all-black cast, Moonlight maintains a dynamic energy because of the acting, director Barry Jenkins' focus on eyes revealing depths of vulnerability and strength, and his characters' periodic direct address to the camera.

Jenkins adapted Tarell McCraney's autobiographical play In Moonlight Black Boys Look Blue, which profiles life in and around Miami's Liberty City housing project, where both Jenkins and McCraney grew up. The setting adds a powerful presence to each scene: homes, schools, abandoned buildings, beaches or, in one of the loveliest scenes, the ocean. In addition, both Jenkins' and McCraney's mothers struggled with drug addiction, real-life experiences again informing the texture of the scenes.

Tops on my list of actors deserving an Oscar nod is Mahershala Ali who plays Juan. Remarkably, Ali makes the Cuban Juan a three-dimensional character rather than the stereotypical drug dealer. As the three Chirons, Alex Hibbert, Ashton Sanders, and Trevante Rhodes use their faces to nakedly reveal emotions while they physically struggle to hide them. It makes for a visceral impact, as does Naomie Harris' terrifying and compassionate performance as Chiron's crack addict mother and André Holland as the adult Kevin.

Nicholas Britell's music and sound, as well as concentrated silences, add distinctive commentary. Jenkins describes the hip-hop used as "chopped and screwed," a slowed down Southern style of poetry and painful yearning. His inclusion of "Hello, Stranger," late in the film, stops the show, a perfect summary of Chiron's search for his own identity and his ability to embrace it, a struggle we all know. Moonlight is among the best films of the year. At a Landmark Theatre.