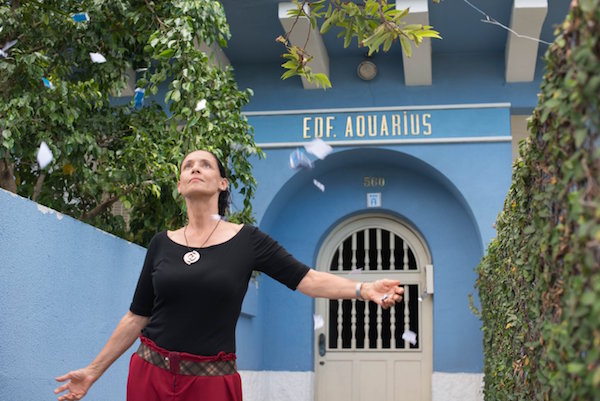 Forget humming the song of the same name from "Hair," and start stamping your feet in the name of justice. That's what Dona Clara would do as she stands in front of her apartment building, defending it against developers, who want to raze it to build The Aquarius.

This is not the dawning of a new age for 65-year-old Clara but the knell of a golden age for the widow of 17 years. She raised her children in her apartment. She worked as a music critic from that building -- and music swirls throughout the film. She could swim in the ocean off the beach fronting her apartment. And she'll be darned if she's going to sell it to unscrupulous developers, who want to turn the two-story building into a skyscraper. They try to sweet talk her into something she knows is wrong.

The building stands in Recife, Brazil, the birthplace of the film's writer and director, Kleber Mendonça Filho. He has a bone to pick with authorities, and he does it with a fierceness befitting his protagonist.

Sonia Braga plays Clara. She covers a range from sweetly adoring gramma to tough momma with chiding children, from a political beast to a woman longing for physical love. Braga raises her voice as Clara rarely, so listen when she does.