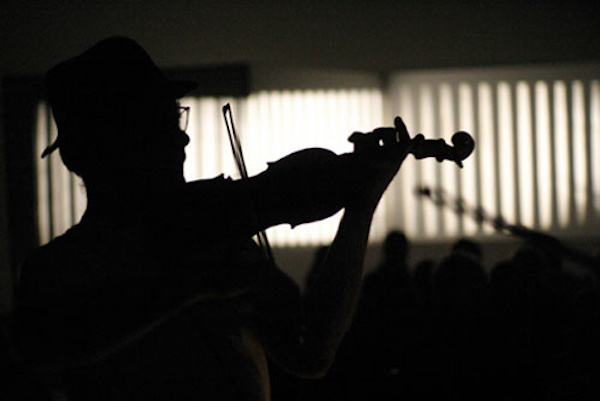 'Tony Conrad: Completely in the Present' profiles this experimental artist

This does not make his music and movies easily accessible, meaning often his works require an intellectual as well as an emotional openness, thrilling for some, difficult for others. For example, for his 1966 Flicker, viewers had to heed warnings that the flashing black and white frames devoid of any other content could trigger epileptic seizures. Audiences walked out of his Straight & Narrow, a film consisting of black and white stripes alternating vertically and horizontally, nothing more, for over two hours.

In his music, in the 70s, he banged on the piano. With electric sounds, he would, as he says, engage and hold the sound. He included weed wacker solos with his violin notes, sometimes discordant, held for effect. Perhaps ironically, Conrad plays the violin quite well. In his teaching jobs, he worked to involve and include under-represented individuals, extending to community cable and Skype access.

In the small doses included in this documentary, the ideas and their execution are bracing, exciting. Cooking a film became for Conrad pickling film, currying film, creoling film. As Philippe Vergne, Director of the Los Angeles Museum of Contemporary Art says, "You can't talk about experimental art without talking about Conrad." He notes later that Conrad doesn't compromise his vision. Conrad's unique offerings do forge a solid awareness of temporal and physical dimensions, of what Tony Oursler calls fractured narratives.

Anchored in comments from Conrad himself about his entire career, Tony Conrad: Completely in the Present screens at Webster University's Winifred Moore auditorium Friday, November 18 through Sunday, November 20 at 7:30 each evening.