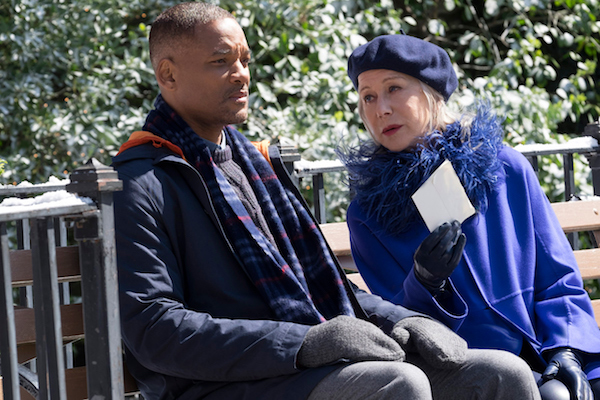 Director David Frankel's Collateral Beauty tackles a truly difficult subject, the death of a child, and handles it sensitively and seriously. The title refers to the feeling of a profound connection to the world as the complement to tragedy. Though the collateral beauty concept remains relatively abstract, it is a heartening, comforting balm in the face of such loss.

The story leads into its focus with hotshot New York adman Howard Inlet delivering an enthusiastic, animated pitch for three defining motivators to our lives: love, time and death. Fast forward to three years later and Howard's loss of his six-year-old daughter, whose name he cannot even bring himself to speak. Howard has become uncommunicative; he's shut down though his company finds itself in a tough financial situation. His three partners desperately need him to vote his controlling shares, while Howard writes letters to love, time and death. And so personifications of Love, Time and Death will visit Howard.

The exceptional ensemble cast does a fine job across the board: the anchor Will Smith as the bereaved father Howard; Kate Winslet, Michael Peña, and Edward Norton as Howard's business partners. Each of them wrestles with significant problems of their own: respectively, reconciling with making career the top priority, facing a terminal illness, and post-divorce coping with a much loved but now alienated daughter. As actors contracted to perform as the abstract personas Love, Time, and Death, Keira Knightley, Jacob Latimore and Helen Mirren compellingly deliver theoretical observations about what frustrates, inspires and measures our lives.

However, as good as the acting is, the actors' different styles don't mesh well. In addition, the tone shifts considerably from scene to scene, sometimes a bit flippant (Knightley), at other moments semi-humorous (Norton), and at times poignant (Mirren). Establishing and maintaining a unified feel rests with the director; and while films certainly can and do move through emotional variations, the shifts should occur more smoothly than they do here. Still, Collateral Beauty asks us to consider monumental topics and to imagine a tragic event with empathy and insight, honesty and thoughtfulness, admitting that the pain will never be fixed. It's refreshing to have a film dramatize the subject of grief with sensitivity. At a Landmark Theatre.