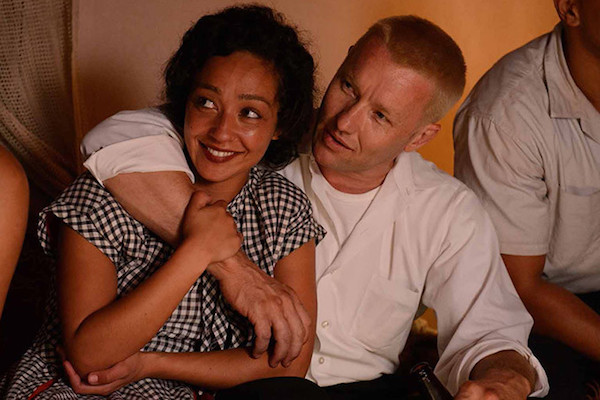 Just ask Jeff Nichols how to make a movie based on the lives of two quiet people. How do you build a script around the voices of people who barely spoke? How does one direct a movie about a Supreme Court ruling when the contestants never appeared in court?

Nichols, who also wrote and directed the exquisite film Mud, just made this film with what he had and let it tell the story of the black and white couple who thought it unfair that they could not marry in Virginia. Nichols does not go so far back as courtship nor to adolescence with these two young lovers, one black, one white. He begins the film with Mildred's simple announcement that she is pregnant. Her head is wreathed in yellow from the porch light. Richard mulls that news over and then says, "Good." He is smiling very loudly.

The two young people drove to Washington, D.C., with her father and were married. Then they drove home to Virginia, where Richard is a mason, a construction worker. And, there, they were drug out of bed and jailed because in Virginia in the late Fifties, the law against miscegenation was still on the books.

Nichols spends the rest of the film showing how the Lovings lived their lives, quietly and a bit desperately. They had three children, who had to play in the D.C. streets. When one is run over and bruised, Mildred wraps them up to return to the countryside where she and Richard face the discordant music.

Ruth Negga, born in Ethiopia, plays Mildred with grace and firmness; Joel Edgerton, born in Australia, plays Richard with stoic simplicity. They are stunning as their eyes do the talking. Their supporting cast is strong -- no weak links. The only really recognizable faces -- Nick Kroll and Michael Shannon -- do not steal the spotlight.