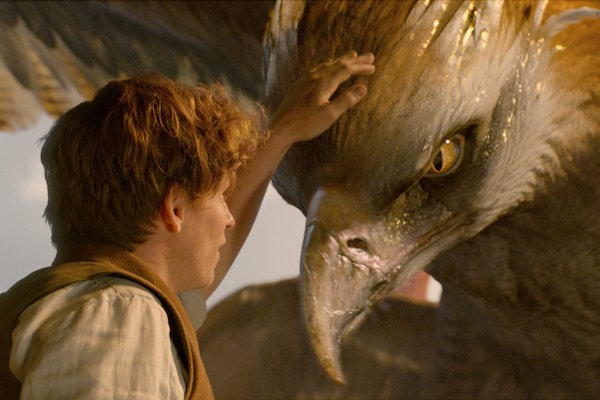 'Fantastic Beasts' is fantastic and fabulous

Newt Scamander is a shy, young writer. He looks out from under his thatch of hair as Diana, Princess of Wales, once shyly peered out. Scamander has been traveling to record stories of fantastic beasts, and he steps on to the dock of New York City, his suitcase full of trouble.

He finds a city in turmoil, a dark, moiling consternation of witches and wizards, city officials and power-mongers. He finds division and crises with no clear sense of who's good and who's evil. The year is 1926 -- 70 years before a young wizard named Harry Potter will read his report. This New York presents as grey and noisy and duplicitous, a city of car horns and cloche hats.

Into this scene arrives Jacob, who works in a cannery. He would be called a Muggle in England, but in America, Jacob is a No-Maj, one without magical properties or skills. Dan Fogler handles the part like yeasty dough. Yet, there's something about Jacob's ambition -- he wants to open his own bakery -- and his innocence. At one point, amidst flashes and crashes, he says, "I ain't got the brains to make this up."

But J.K. Rowling does. She wrote the script for this movie just as she wrote the Harry Potter series, from which Fantastic Beasts shoots off. David Yates, who directed four Harry Potter films, directs Beasts with a good sense of balance between plot and special effects. Beasts refers tangentially to the novels, not so much as to confuse newly viewers. Beasts sinks along the way, just as the Potter films did, but its plot follows a more direct path and its effects and production and costumes are noteworthy and fun.

Eddie Redmayne acquits himself well and earnestly as Scamander, supported by Samantha Morton, Colin Farrell, Jon Voight, and Katherine Waterston. And, yes, that is Johnny Depp in a cameo.

Fantastic Beasts and Where to Find Them is just fabulously fantastic.