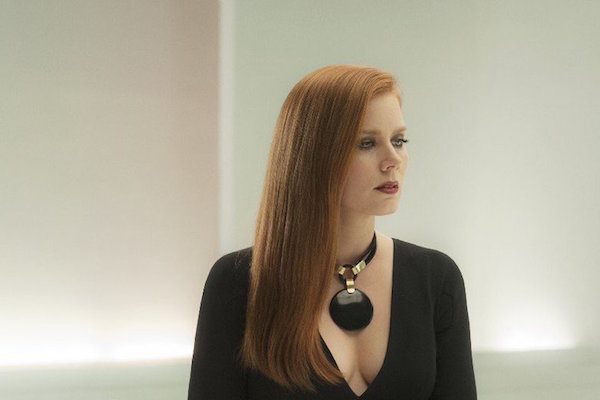 Watch the opening sequence with both eyes open and that third eye unblinking. Dancing Venus of Willendorf-type marionettes in military dress become real, big women with thigh-high boots, and that becomes Celtic knots of highways seen on high. It's a series of moving still lifes, befogged and misted.

Then the exposition begins. Susan, a gallery owner, is saying good-bye to her husband, who is off with his doxy -- something Susan is beginning to cotton to -- when a package is delivered. Inside is a manuscript written by her first husband, Edward, and entitled Nocturnal Animals, his nickname for sleepless Susan, to whom he dedicated the book.

Susan toddles off to bed with a maybe-good, certainly tantalizing book to read. Whereupon the film becomes the book about a man and his wife on vacation in Texas, far from Susan's glittery world. There are a film chase, right out of the Sam Peckinpaw School of Domestic Terrorism and a book plot from the Rape Culture. Horrified, Susan slams the book shut with her blood-red fingernails. She becomes the woman abandoned in life and in art; she cannot slice the book out of her head, even as she meets with her people at the gallery to discuss art, not life.

Amy Adams plays Susan, suave and slick and terribly believable. Jake Gyllenhaal plays Edward, the husband, and Tony, the protagonist of the novel -- and he never misses a heartbeat in either roles. They are supported finely by Michael Shannon, Isla Fisher, Aaron Taylor-Johnson, and a hair-sprayed Laura Linney as Susan's brittle mother.

Tom Ford has made a very scary movie, resplendent with his sense of decorum, of flashbacks among past and present, in novel and life, of color (especially reds), of bleeds and connectors from scene to scene. Nocturnal Animals offers film as crisp, well-cut, tautly sewn, and artfully made to perfection.