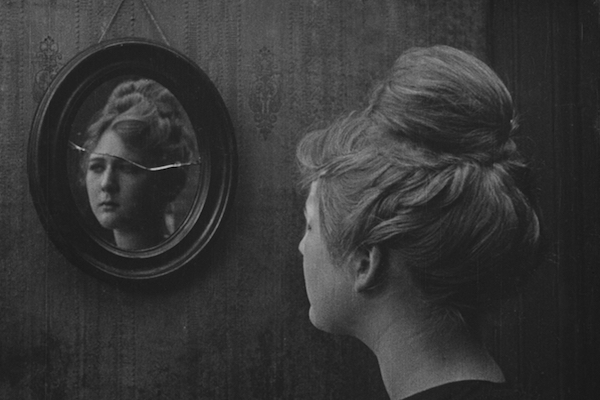 One hundred years ago, in the 1916 film Shoes, directors Lois Weber and Phillips Smalley provided a primer in poignant storytelling, perfectly pacing the events to reveal the central character, Eva Meyer. Eva works as a five-and-dime store clerk who turns over her weekly salary to her mother who provides for a ne'er-do-well father and Eva's three younger sisters.

Adapting Stella Wynne Herron's short story published in "Collier's," Weber's screenplay emphasizes the effects of poverty and limited choices because of it. Even with Eva's shoes literally falling apart, the family can't spare the $3 needed to purchase a new pair, and so Eva moves every closer to prostituting herself with a dishonorable musician. As Eva, Mary MacLaren telegraphs subdued despair.

Straightforward and uncluttered, Shoes benefits from on-location shooting, one scene in Los Angeles' Pershing Square, another the front of Woolworth's on Broadway. A wealth of details fill every frame while remarkable effects, especially for 1916, enhance the story. The tinting is particularly beautiful, with a yellow tint throughout store and home scenes with blue tinting to signal night shots.

In addition, Weber superimposes dream footage into the upper left part of the frame; dissolves from the old, shabby to fancied, new shoes and back; and dissolves from a medium shot to a medium close-up to communicate Eva's emotions more effectively. Though the edges of some frames show the deterioration characteristic of nitrate film, fortunately, thanks to Milestone Film restoring the best quality possible, Shoes exists in this wonderful print, with an evocative music score by Donald Sosin and Mimi Rabson.

Made three years before Shoes, the 1913 Suspense stars director Lois Weber herself as a wife in danger. Isolated in her home, Weber is threatened by a tramp who breaks in. This quick, 10-minute film also showcases Weber's cinematic expertise, notable for Weber's inclusion of a triptych, remarkable close-ups, and a thrilling conclusion with cross-cutting among the husband and police racing to save the wife as the intruder approaches the upstairs room to which she has retreated.

The Midwest premiere of Shoes preceded by Suspense is at Webster University's Winifred Moore auditorium one night only, Sunday, December 11 at 7:30 p.m.