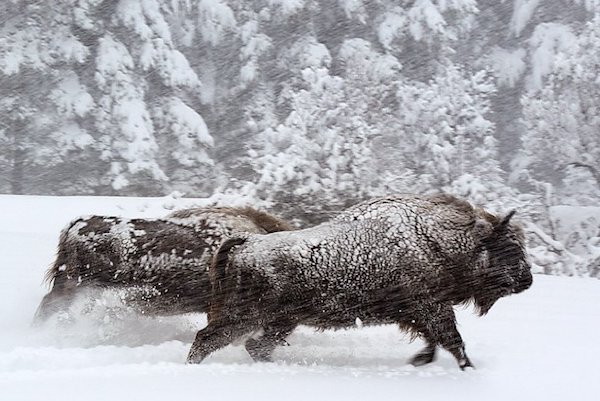 'Seasons' sneaks in politics among beauty

A film made by Jacques Perrin and Jacques Cluzaud is bound to be stunning, eye-popping, gob-smacking. After all, les deux Jacques made the unforgettable films, Winged Migration and Ocean. But Seasons has a powerful, if subtle, message beyond the beauty and intimacy of the natural world.

One would think that the title of this excellent documentary refers to the four seasons, hallowed in song and story. It's not. Yes, it begins in winter, but the narrator mentions that winter lasted for 80,000 years, so it's soon obvious that Perrin and Cluzaud have other seasons in mind to document. Their seasons are eras, related to the geologic time table, to history, to time immemorial.

Their seasons cover interminable winters, welcome springs, droughting summers, and fallen autumns over millennia. Their seasons begin with flora and fauna, and not until the documentary is two-thirds complete, do human beings enter the landscape to despoil same.

The script by the Frenchmen is often poetic, but it does not intrude, not even to identify the specific names of the gorgeous orange-beaked bird, the one with the charcoal-colored feathers -- or the bovines or cervines or felines. The cameras, under the direction of Eric Guichard, look closely at fighting bears, the stacked stones of cairns, and at calving glaciers. They look shyly through green and yellow trees or over the wings of geese. And, in the end, when humans show up, the cameras record a wolf lick-kissing a babe, then the huts, and then the battlements built by humans.

Bruno Coulais' music offers pizzicato sounds on strings to accompany the bellows of elk or squeaks of hedgehogs. Seasons is very, very beautiful to look at, but do not get so mesmerized by the visions and miss the message. Seasons is more than pretty.