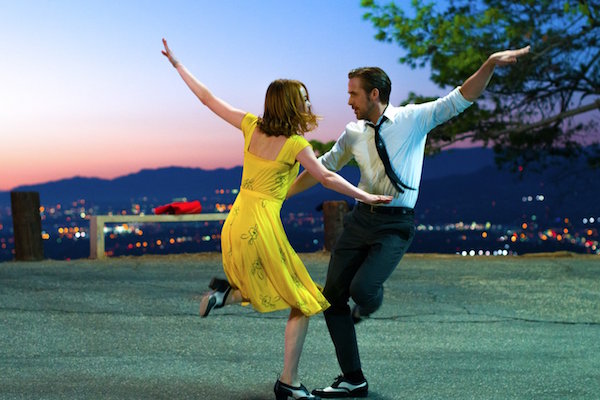 Writer/director Damien Chazelle's La La Land offers a delightful, exuberant indulgence in song and dance in the Fred Astaire-Ginger Rogers tradition. With romance on their minds, Mia and Sebastian find themselves adrift in Hollywood, crisscrossing each other in their aspirational endeavors. He's a jazz pianist who can't conform to playing bland music and she can't quite secure a desirable role.

Before the story settles into Mia and Sebastian's on again/off again fling, the film begins with an incredible, show stopping musical number on a congested L.A. freeway. Cinematographer Linus Sandgren has choreographed an exhilarating opening number with drivers in and out of their cars, dancing on them, through the lines of automobiles, and with each other. It's so dynamic a beginning that it takes an enormous push of energy from Emma Stone, not the most energetic of actors, and Ryan Gosling, not the most animated, to reignite the action.

For their encounters, Chazelle does successfully establish a different tone, one of yearning and desire. Can Stone and Gosling sing and dance with the best? Well, no, their voices are slight, but they're a joy to watch, and Gosling learned to play the piano quite well and Stone exudes a plucky frustration. In a strong, too small supporting performance, John Legend as Keith brings his historical insight about jazz to the proceedings, and J.K. Simmons is the inflexible, conservative boss.

In Whiplash, Chazelle structured the film to the drum rhythms he championed. Here he channels some of the musical classics he screened for his cast and crew during production, including The Band Wagon and Top Hat. The meticulous design extended to Austin Gorg's art direction, especially the Technicolor palette that visualizes the seductiveness of our fantasies. This includes costumes as well with Mia in a silky, flowing dress as she and Sebastian merge in perfect emotional synchronicity. Credit also to composer Justin Hurwitz and lyricists Benj Pasek and Justin Paul who keep the mood light in a dream factory world that also shatters aspiration and crushes the ambitious. In short, La La Land beautifully establishes and balances the illusory appeal of our dreams with harsh reality in a jaunty, entertaining film. Check area listings.