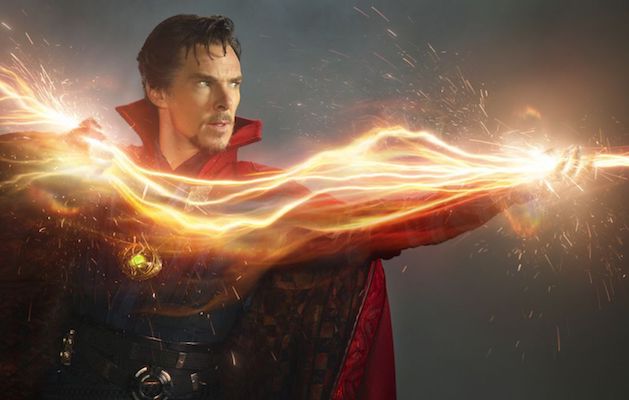 The Marvel Cinematic Universe has many superheroes with extraordinary powers, but for my money Dr. Stephen Strange has the most intriguing story. Created by Steve Ditko, Dr. Strange works as a lauded neurosurgeon in New York City, a man impressed with his own expertise. A car accident damages his hands so badly that he can no longer operate.

His life's work in the balance, after trying all western medicine can offer, in desperation Stephen travels to Katmandu to try alternative healing. Dr. Strange gets more than he bargained for as he encounters a metaphysical universe beyond his initial comprehension. Above all, Dr. Strange must forget all he thinks he knows to overcome his own egotistical self-aggrandizement. Love interest Dr. Christine Palmer helps in that regard, though it would be so refreshing for the romantic liaison to be more than a helpmate.

Co-writer/director Scott Derrickson showcases his great cast beginning with Benedict Cumberbatch as Doctor Stephen Strange, Chiwetel Ejiofor as Mordo, Rachel McAdams as Dr. Palmer, Mads Mikkelsen as Kaecilius, Benedict Wong as Wong, and the always wonderful Tilda Swinton as The Ancient One. They act and, often a more difficult task, interact credibly, listening to and countering each other. True professionals, the actors also explain and convincingly present the philosophical and theoretical elements, thanks to a complex but absorbing examination of life's mysteries: mind and matter.

The special effects are exactly that, very special, especially because they connect with the ideas rather than obligatory superhero fights artificially interjected. When Dr. Strange folds and warps time, energy and space, it becomes a visual feast reminiscent of Inception, but it also visualizes his journey. And when transporting characters to and through altered dimensions is needed, sound and image concoct a thrilling creation of complementary factors. In addition, attention has been given to small details of the art direction, including the makeup.

Fans might come for the CGI, the astral projection and even the enjoyable humor that Cumberbatch interjects so seamlessly, as he does in Sherlock. But Doctor Strange, while not a physics lesson, includes tantalizing play with science, and it counsels the reining in of inflated ego. With both of these in one film, count me in. At area cinemas in both 2D and 3D.